The People’s Liberation Army Navy (PLAN) dispatched an eight-ship carrier group, led by the carrier CNS Liaoning (16) and accompanied by five destroyers, a frigate and a replenishment ship, into the Pacific Ocean via transit of the Miyako Strait Monday, marking the first time since December 2021 that the carrier has operated in the area. […] 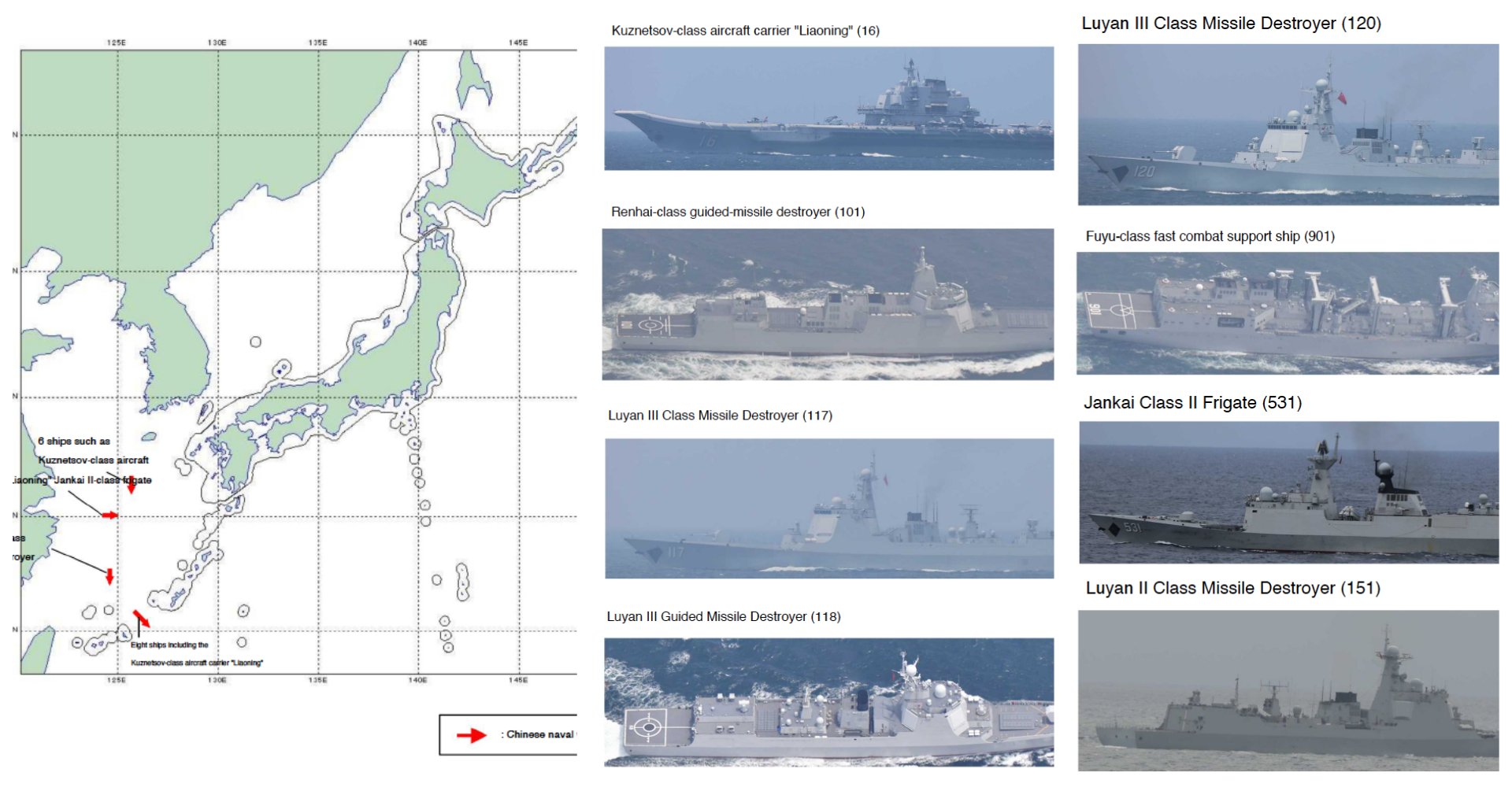 Chinese ships operate off the coast of Japan on May 2, 2022. Japanese MoD Images

The People’s Liberation Army Navy (PLAN) dispatched an eight-ship carrier group, led by the carrier CNS Liaoning (16) and accompanied by five destroyers, a frigate and a replenishment ship, into the Pacific Ocean via transit of the Miyako Strait Monday, marking the first time since December 2021 that the carrier has operated in the area.

The Joint Staff Office (JSO) of the Japan Self Defense Force (JSDF) issued a release Monday on the group’s passage along with photographs of the ships in the group, identifying them by class and pennant number.

Liaoning together with Nanchang, Xining, Urumqi, Chengdu and Hulunhu were sighted sailing south in an area 350km west on the uninhabited Danjo Islands in the East China Sea around midnight Sunday, according to the Joint Staff Office’s release. At 6 p.m. Sunday, Xiangtan was sighted sailing eastward in an area 480km northwest of Okinawa. On Monday, Zhengzhou was sighted traveling south, 160km north of Taisho Island. The PLAN ships subsequently sailed south together through the Miyako Strait.

Chinese naval spokesperson Gao Xiucheng said the Liaoning group is conducting training in the western Pacific Ocean and that it was a routine training organized by the Chinese navy, according to its annual plan and in line with relevant international law and international practice, China’s Xinhua news agency reported Tuesday.In December last year, Liaoning along with other PLAN ships conducted flight operations in the vicinities of Kita Daito and Oki Daito islands in the Pacific Ocean. Japan now plans to have a mobile radar station based on Kita Daito Island and is considering moving towards permanent radar stations on the Daito Islands to monitor foreign naval activities and transits in the area. 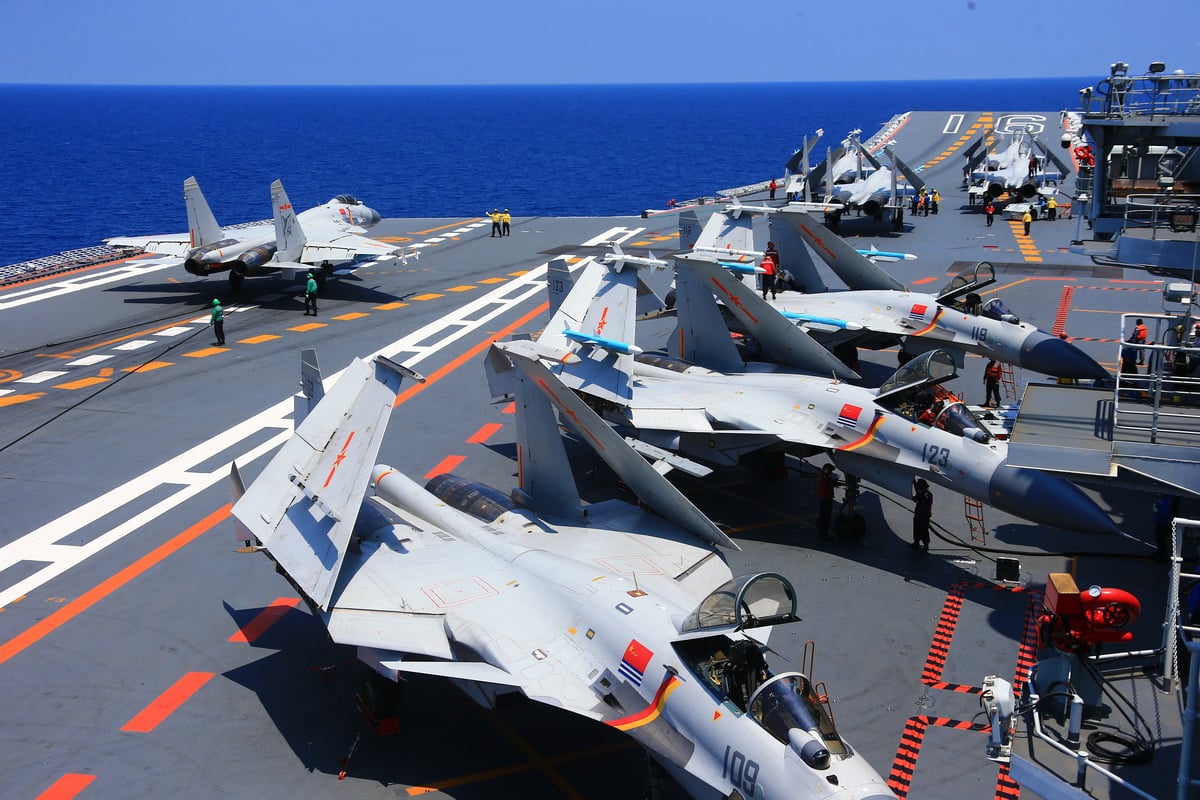 Littoral Combat Ship USS Jackson (LCS-6) is now in Singapore at Changi Naval Base, arriving on Tuesday to carry out a planned maintenance availability (PMAV) period while in Singapore, according to a 7th Fleet release

“Having Jackson once again using Changi Naval Base as the site for maintenance is a significant milestone and gives operational commanders increased adaptability for maintaining and operating ships,” said Rear Adm. Chris Engdahl, commander, Expeditionary Strike Group (ESG) 7/Task Force 76 in the release. “We are thankful for our defense relationship with the Republic of Singapore and their willingness to host our ships as we strive toward a common goal of ensuring a free and open Indo-Pacific.”

The Royal Navy Offshore Patrol Vessel HMS Spey (P234) arrived in Singapore Friday at Sembawang Naval Installation to join sister ship HMS Tamar (P233). Both Royal Navy vessels are on a five-year deployment to the Indo-Pacific region as part of an overall UK policy to strengthen its presence in the region.

KUALA LUMPUR, MALAYSIA – A six-ship People’s Liberation Army Navy carrier group led by aircraft carrier Liaoning (16) is currently operating in the Pacific Ocean, according to releases from the Japanese military.

The PLAN carrier group featuring Liaoning, destroyer Nanchang (101), a Luyang III-class destroyer, frigate Rizhao (598) and another Type 54A Jiangkai II frigate, along with a Type 901 replenishment ship, was in the vicinity of the waters off the uninhabited Oki Daito Island, 315 kilometers, or about 196 miles, southeast of Okinawa on Dec. 20, the Joint Staff Office of the Japan Self-Defense Force said in a Tuesday news release.

The carrier was conducting flight operations with J-15 fighter aircraft along with Z-9 and Z-18 helicopters from 8 a.m. until 7 p.m. that day. The JSO issued an earlier release on the same day that noted the activity of the PLAN carrier group on Dec. 19, saying it was in the vicinity of Kita Daito Island, 300 kilometers, or about 186 miles, east of Okinawa and conducting flight operations from 8 a.m. to 9 p.m.

Liaoning, Nanchang, Rizhao and the Type 901 replenishment ship were sighted in the area west of the Danjo Islands in the East China on Dec. 15, traveling southeast with the four ships, then operating between Miyako Island and Okinawa on Dec. 16 and sailed southwards into the Pacific Ocean from the East China Sea, according to a news release the JSO issued on Friday. Helicopters were conducting flight operations throughout the two days, the JSO said. Although the releases made no mention of it, it is likely that the unnamed Luyang III-class destroyer and Jiangkai II frigate were already operating in the Pacific Ocean and subsequently joined the four ships there.

Friday’s release also said the Japan Maritime Self-Defense Force destroyer helicopter carrier Izumo (DDH-183) and destroyer Akizuki (DD-115) – along with P-1 maritime patrol aircraft of Fleet Air Wing 1 at Naval Air Facility Atsugi, Honshu and P-3 Orion MPAs of Fleet Air Wing 5 at Naha Air Base, Okinawa – were monitoring the passage of the PLAN ships on the 15th and 16th. Tuesday’s releases noted that Izumo was monitoring the PLAN carrier group and that Japan Air Self-Defense Force fighters had been scrambled in response to the carrier launching fighter aircraft. 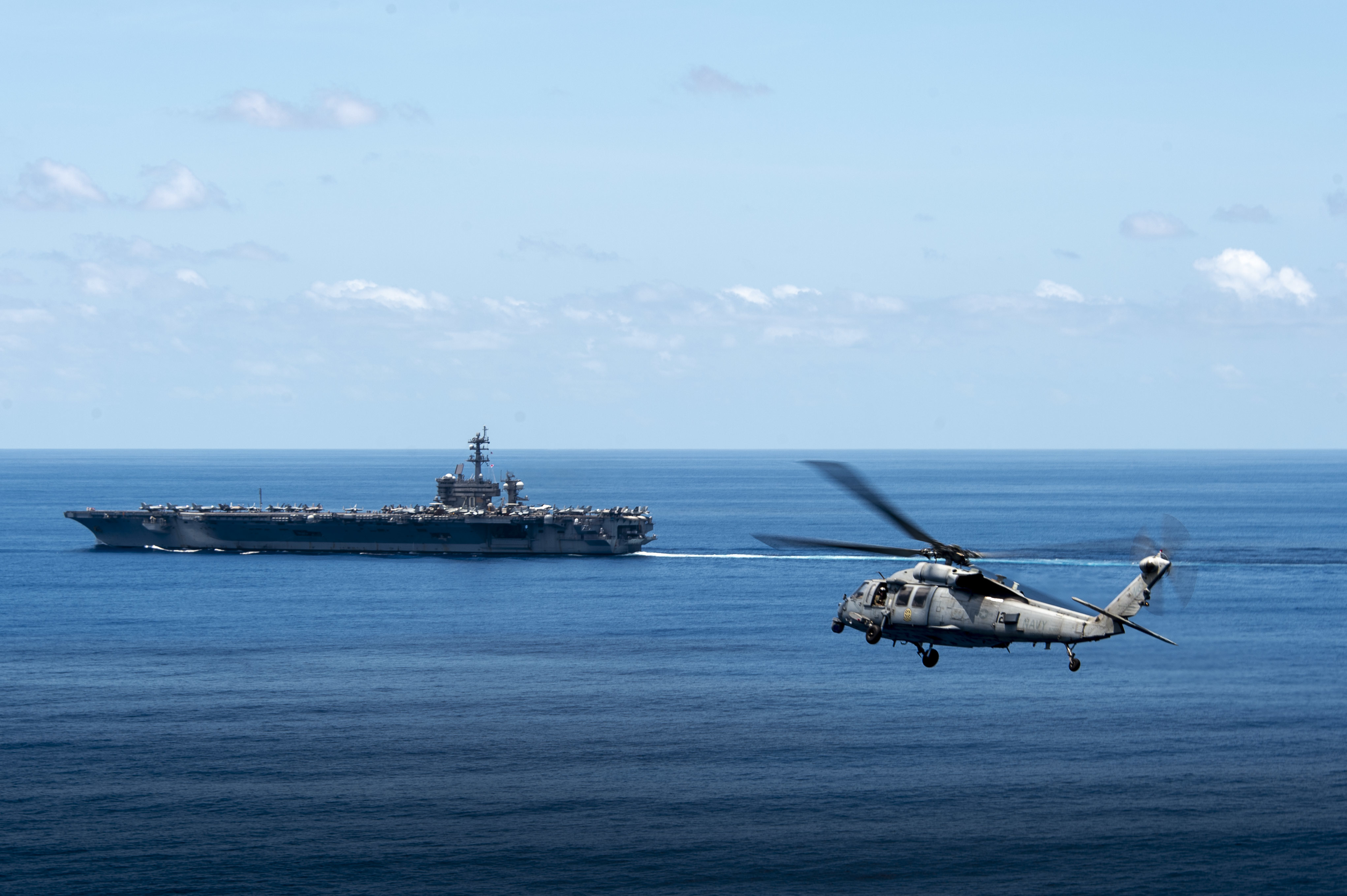 Meanwhile, the U.S. Navy’s Carl Vinson Carrier Strike Group continues it deployment in the Western Pacific ,with the strike group recently finishing a bilateral training exercise with the Royal Australian Navy and Royal Australian Air Force that took place from Dec. 10 through 19 in the Indian Ocean off Australia. The exercise was for both countries “to deploy high-end training tactics and improve proficiencies in advanced kinetic and non-kinetic capabilities, capable of projecting dominant defensives against a multi-domain threat environment,” according to a U.S. 7th Fleet news release.

During the exercise, the forces drilled for scenarios ranging from electronic warfare operations to combined anti-surface and anti-air engagements, 7th Fleet said.

“Conducting advanced kinetic and non-kinetic bilateral exercises with our allies and partners increases our collective ability to outthink and outfight any adversary threatening our open seas,” Rear Adm. Dan Martin, the commander of Carrier Strike Group One, said in the news release. “Our long-term alliances and partnerships in the Indo-Pacific region preserve maritime prosperity and international order, and enable seamless integration, communication, and collaboration across the region.” 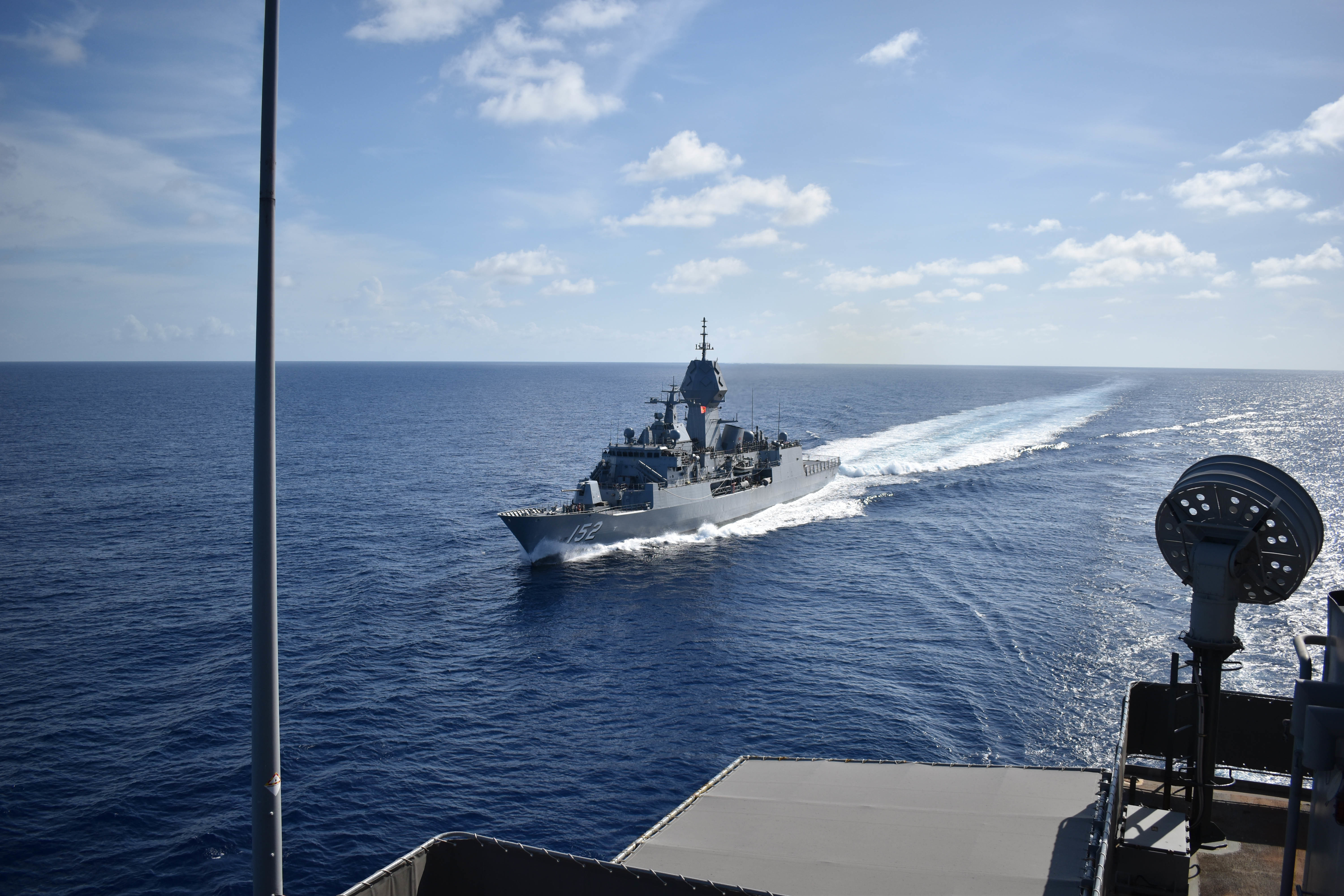