The U.S. Navy, Marine Corps and Coast Guard say they need to begin acting more assertively to push back against gray-zone operations China is already conducting today. That means having more forward forces to deter, to document malign behaviors and to support partners as they protect their territory, according to service leaders. The three services […] 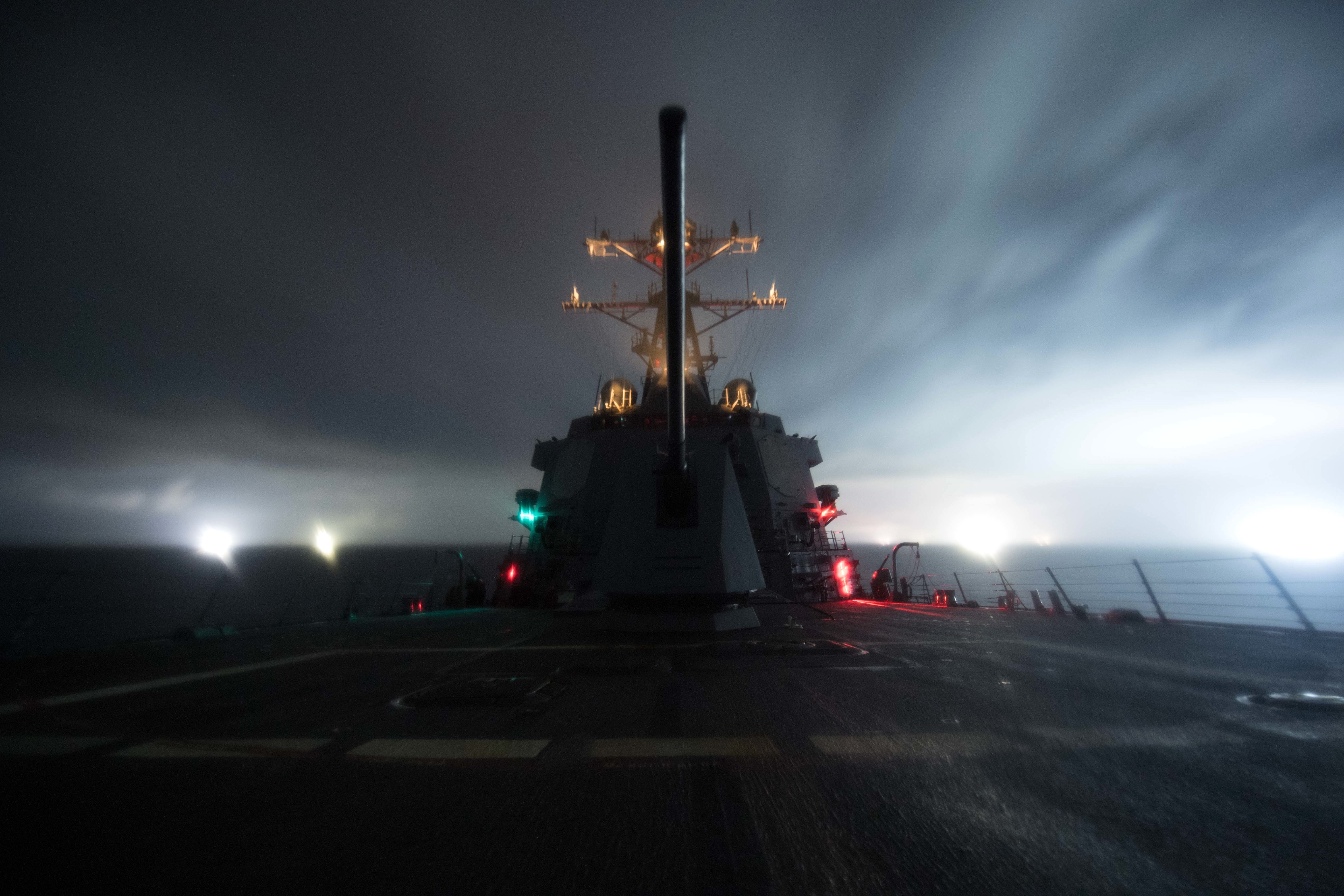 The U.S. Navy, Marine Corps and Coast Guard say they need to begin acting more assertively to push back against gray-zone operations China is already conducting today. That means having more forward forces to deter, to document malign behaviors and to support partners as they protect their territory, according to service leaders.

The three services released a new strategy today, Advantage at Sea: Prevailing with Integrated All-Domain Naval Power, after 11 months of work determining the best way to push back against Chinese behavior already taking place as well as prepare for greater crisis or conflict should it occur.

“We have to have a force that’s not just focused on that high end, and we have to act in the day to day, because people with adversarial approaches to that freedom of access to the global commons, to that rule of law, are looking to push until there’s resistance. And we haven’t offered that as much in the past,” Rear Adm. James Bynum, the acting deputy chief of naval operations for warfighting development, told USNI News today during a media roundtable on the new document.
“This is a recognition as much as anything that we have to act in the day to day to shape the global environment and maintain that access. I think that’s one of the pieces of, at least, why this is tri-service. It’s because of the partners and the authorities and the capabilities and the things that the Coast Guard can bring in the day to day is key to this.”

Rear Adm. Pat DeQuattro, the Coast Guard deputy for operations, policy and capabilities, said during the call that the Coast Guard has more than 60 bilateral relationships with countries across the globe, and that a key part of their responsibility under the new strategy would be to bolster those relationships and agreements to focus more on the top-tier threats to global security – China, primarily, but also Russia, according to the strategy, as well as Iran, North Korea and transnational crime and terror groups – and how to push against those countries as they try to erode norms and infringe on other countries’ rights and territories.

“We need to be consistent with global rules-based order. And so that we’re not only speaking on behalf of U.S. laws and regulations, but we’re really leading on behalf of the global community as you call out coercive behavior that is against norms. Additionally, to do it in close coordination with our partner nations: we are not the only one in the South China Sea region or in the [U.S. Southern Command] area of responsibility that recognizes and then vocalizes their concerns for that type of behavior,” he said of Chinese violations of fisheries laws and other natural resources.

Strengthening international agreements to better deal with China could be as simple as bringing in a new partner who hadn’t worked with the U.S. before for a basic search-and-rescue assistance agreement, or it could be growing partnerships into sailing together under a common maritime force commander.

Maj. Gen. Paul Rock, the director of the strategy and plans division at Marine Corps headquarters, said during the call that “when we talk a more assertive competition posture, I think your imagination immediately leads to standing face to face with somebody and daring them to cross a line sort of thing. I think that there’s a lot more depth to the ability to compete on a daily basis, to include building a network and reinforcing a network of capable allies who feel assured that we got their back and they got ours and are willing to expose malign influences and themselves expose what the adversaries might be doing.”

Just today, he said, several global news outlets reported on the fact that the People’s Liberation Army (PLA) declined to participate in the virtual Military Maritime Consultative Agreement Work Group and Flag Officer Plenary session with U.S. Indo-Pacific Command, which was scheduled to take place earlier this week. Rock said the MMCA focuses on basic safety in the maritime domain and is not meant to be political; instead, he said, China tied its appearance to several political complains and refused to attend. Calling out this behavior, which INDOPACOM did in a news release, is one way to begin pushing back against not only Chinese behavior but also Chinese information warfare and propaganda.

In other instances, though, simply calling out China isn’t enough, the officers said – with adversaries like China and Russia proving adept at getting out ahead of incidents and spinning the narrative in their favor, the U.S. can’t just say they behaved badly, they need to have proof. That will mean having more advanced sensors – and having them fielded in numbers in strategic locations – to document aggression by Chinese flotillas, or Chinese military auxiliary ships disguised as fishing vessels infringing on territorial waters, or other actions that occur regularly today but go unpunished.

The strategy documents notes, “together with international and whole-of-government efforts, the Naval Service will detect and document our rivals’ actions that violate international law, steal resources, and infringe upon the sovereignty of other nations. We will provide evidence of malign activities to U.S. and international officials to expose this behavior and increase the reputational costs for aggressors. Forward naval forces, leveraging our complementary law-enforcement authorities and military capabilities, will stand ready to disrupt malign activities through assertive operations. Our expanded efforts will refute the false narratives of our rivals and demonstrate the United States’ commitment to protecting the rules-based order.”

Rock told USNI News during the call that “we have recognized as an institution, as a Naval Service, that we have competitors who are heavily invested – in their strategy, their operations, their tactics – in operating in the gray zone, below the level of armed conflict. And we can either cede that ground to them, or we can try to adapt the naval force to be able to compete more effectively – even if that competition is something as simple as exposing their malign behavior through a more capable sensor or platforms or whatnot and show the world what’s going on so folks can see the truth with their own eyes.”

All three officers spoke about the need to be present to make this strategy work, both so they can deter the bad behavior and also so they can support allies and partners as they increasingly stand up to bad actors, too.

Rock acknowledged that prioritizing this work over other demands from combatant commanders is easier said than done, but he said this document lays down a marker that the joint force needs to allow the Naval Service – the collective of the Navy, Marines and Coast Guard – to focus on this day-to-day competition so the United States doesn’t find itself unable to catch up or unable to access strategic maritime locations if tensions were to increase.

Additionally, they spoke about investments to support a force that can compete in gray-zone operations and also win in a fight.

“Consistent with recent Force Design and Force Structure Assessments, the Naval Service is going to develop capabilities and forces that we will provide to the joint force and fleet commanders to give them the ability to deter adversary aggression, counter gray-zone competition, and win in conflict if deterrence fails,” Rock said.

“You need to look no further than the ongoing Chinese and Russian modernization efforts that focus on overcoming our advantages created by our traditional power projection and forcible entry capabilities for justification as to why we can’t just keep doing what we’ve been doing,” he continued.
“Our adversaries responded to our obvious military advantages and adapted their operational and strategic approaches as well as their anti-access and area-denial capabilities to counter us. The Naval Service must regain and maintain the initiative,” and that includes investments in long-range anti-ship weapons, undersea warfare weapons, unmanned platforms in all domains, increased cyber and electromagnetic spectrum capabilities, and more.

The Marine Corps has been out in front of this effort, earlier this year announcing it would divest of legacy capabilities like tanks and law enforcement battalion capabilities to free up resources for new capabilities and new formations that would be agile and lethal.

Bynum said the Navy would have to “take risk in that near-term operational footprint to buy those resources for investing and developing that future force.” 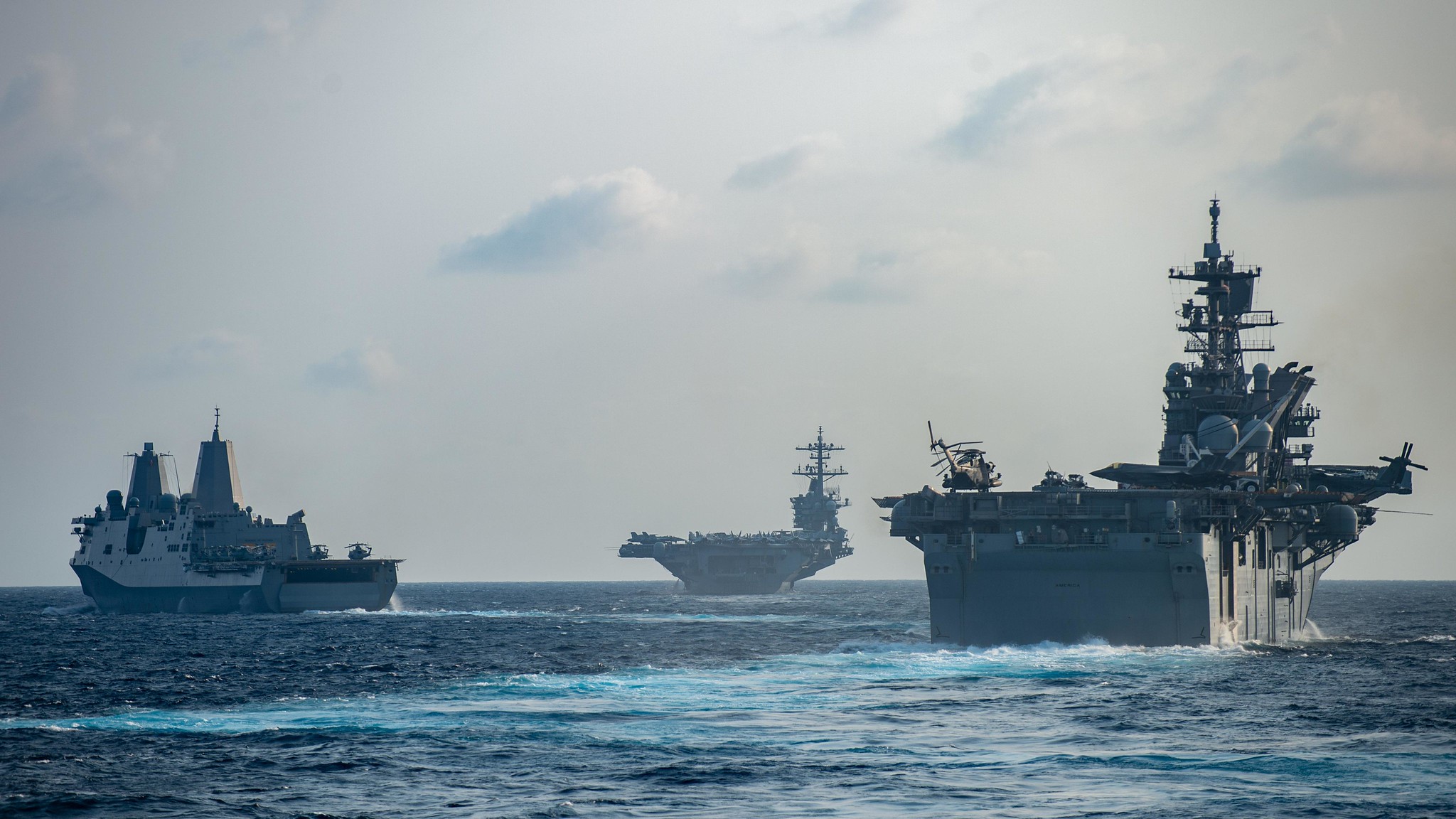 “It’s really, where can we take risk or eliminate missions to go after those things that will make that integrated all domain naval power force the one we need for the future?” he said, adding that work was ongoing to identify operational requirements that could be taken away to free up resources to focus on building readiness and lethality for this priority mission under the new strategy.

He reiterated that the strategy will be hard to implement if the Naval Service can’t follow through with increased presence in priority areas.

Part of being more assertive, he said, is attitude; the other part is posture.

“Are we positioned to be where we need to be with the requisite forces with enough training, power and visible presence to deter malign intent?”

It’s unclear how the combatant commanders and the incoming Biden administration will feel about this strategy’s pitch for prioritizing global deployments, but it’s clear that the sea services’ leadership are all in on the plan.

“As sailors, we are on the leading edge of great power competition each and every day. Sea control, power projection and the capability to dominate the oceans must be our primary focus. Our forces must be ready today, and ready tomorrow, to defend our nation’s interests against potential adversaries at any time. This strategy helps us do exactly that,” Chief of Naval Operations Adm. Mike Gilday said in a statement today.