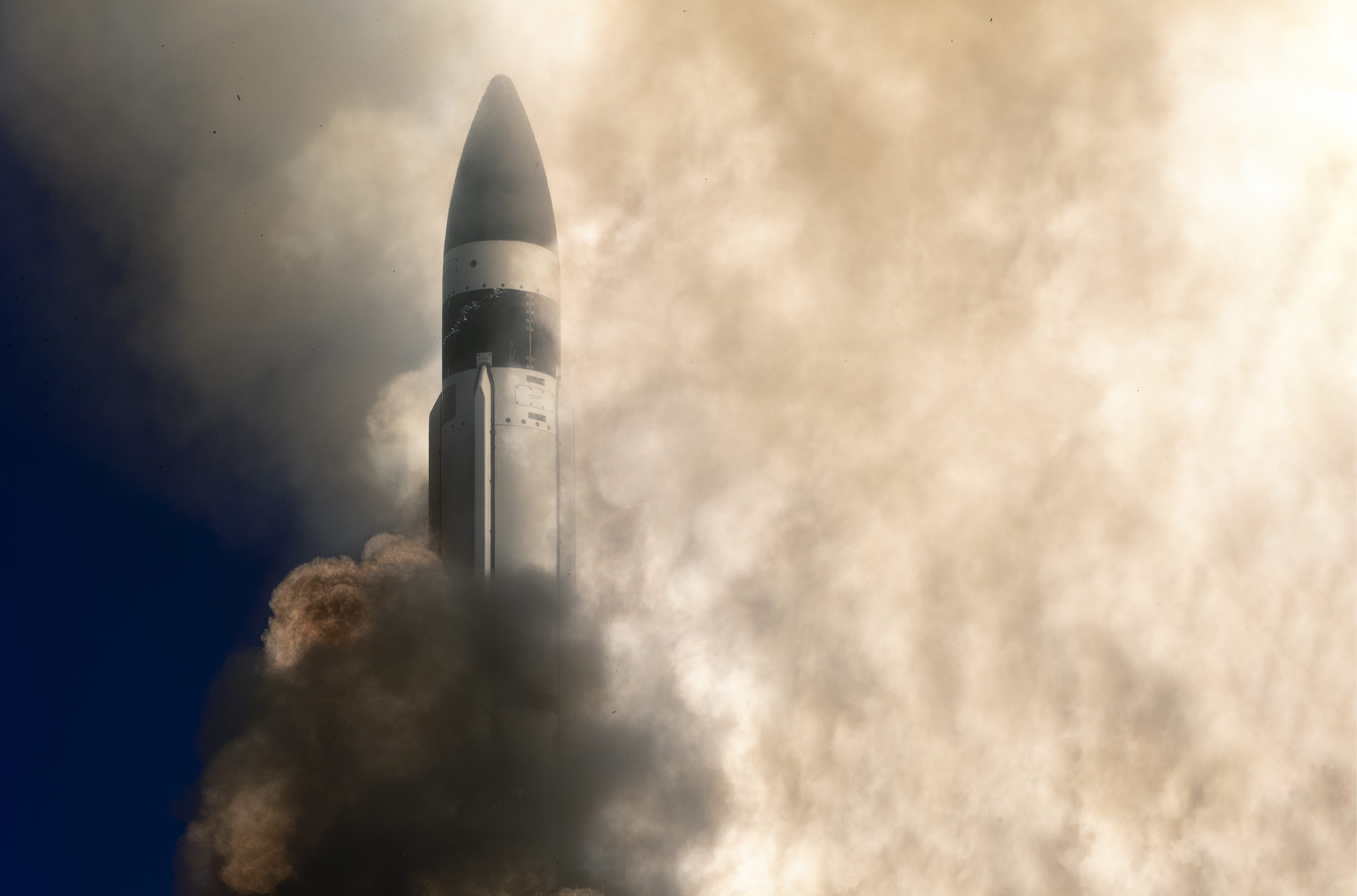 The Japan Maritime Self-Defense Force (JMSDF) and the U.S. Missile Defense Agency (MDA), in cooperation with the U.S. Navy, announced the successful completion of Japan Flight Test Mission-07 (JFTM-07), held off the coast of Kauai in Hawaii, on Nov. 18, 2022. MDA Photo

The capabilities include research on hypersonic cruise missiles, the development of high-speed glide bombs for island defense, target observation munitions, Unmanned Underwater Vehicle (UUV) control technology, development of new sea mines, improved Type 12 anti-ship missiles, the mass production and deployment of high-speed glide bombs, mass production of the improved SH-60K anti-submarine warfare helicopter, a new anti-ship missile for maritime patrol aircraft, the mass production of torpedoes with a silent power unit and the acquisition of Tomahawk cruise missiles. The disclosure is in line with a 2019 MoD enactment on measures for clarification and transparency on new military equipment.

On hypersonic cruise missiles, the MoD said its study found only domestic research and development candidates met the operational concept and performance requirements. It selected a domestic operational research demonstration to develop prototypes for evaluation and funding for the research under the Fiscal Year 2023 defense budget request. (Japan’s fiscal year begins on April 1. The MoD did not disclose the amount allocated in the document, but the MoD’s FY 2023 budget request asked for 58.5 billion yen, or $454 million.

For high-speed glide bombs, the MoD said it will develop them with long ranges and make them capable of traveling at supersonic speeds and high altitudes from various points in Japan to deal with invasions of islands. An MoD study concluded that only domestic candidates can meet the requirements for operational concept and performance, so Japan will pursue domestic development. The FY 2023 budget request sought 200.3 billion yen, or $1.54 billion, for development. A second entry on building and deploying high-speed glide bombs said that while Japan expects to finish research into the bombs by FY 2025, the bombs could operationally deploy as early as possible. This could potentially happen before the research finishes, so acquisition costs were factored into the FY 2023 budget request. It did not give an exact timeframe as to when manufacturing and deployment will begin. 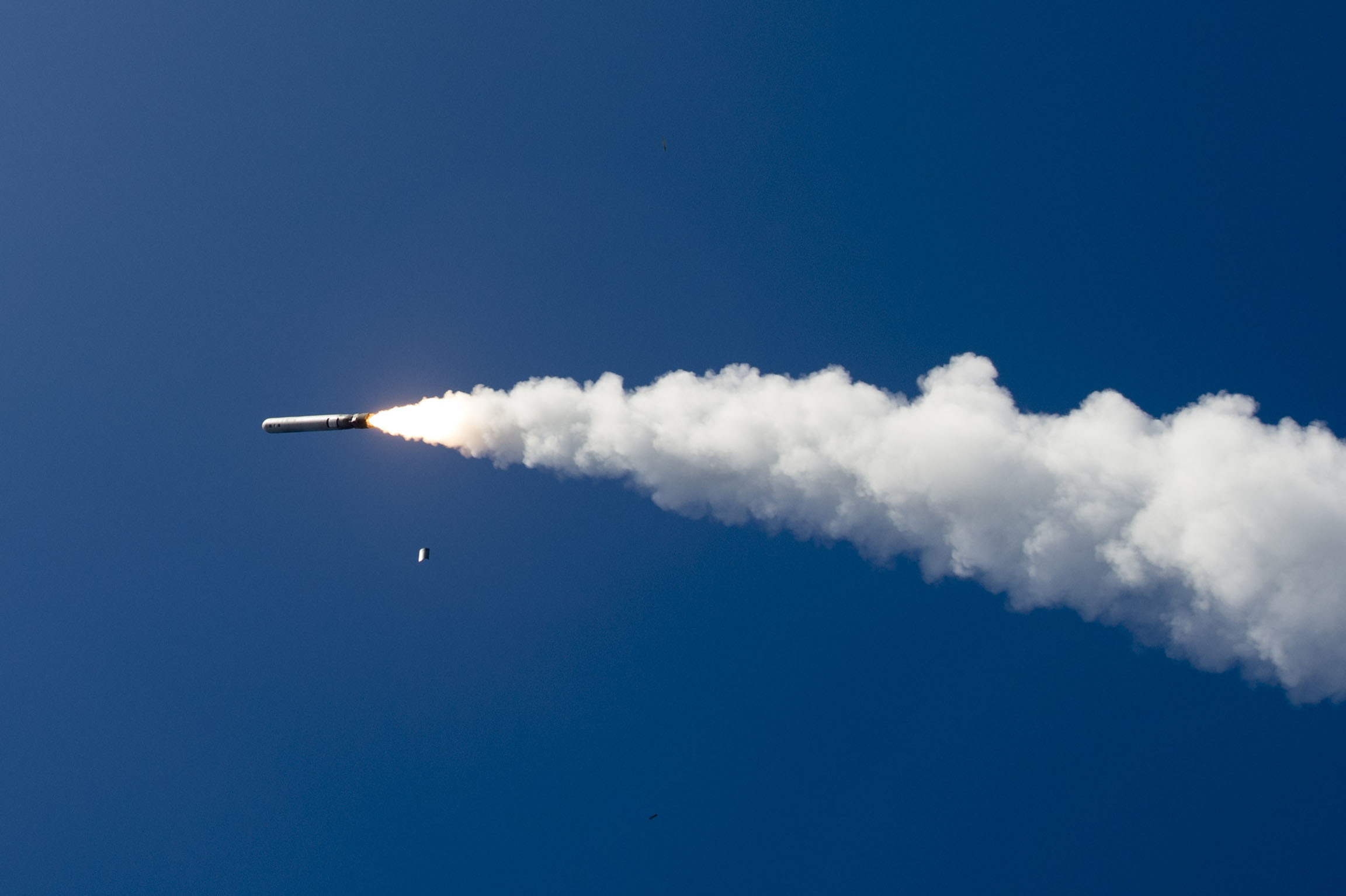 A tomahawk cruise missile launches from the Arleigh Burke-class guided-missile destroyer USS Shoup (DDG-86) for a live-fire exercise during Valiant Shield 2018 on Sept. 18, 2018. US Navy Photo

On the Tomahawk cruise missiles, the MoD said they are necessary to acquire a stand-off missile capability for defense as soon as possible and that the Tomahawk met the criteria, like acquisition schedule and performance. The acquisition costs were included in the FY 2023 budget request, which sough 211.3 billion yen, or $1.62 billion, along with an additional 110 billion yen, or $847 million, for software, equipment, technology transfer fees and training.

It’s unclear if the target observation munitions entry referred solely to loitering munitions or unmanned air vehicles to provide target acquisition data for other weapon systems or a combination of both. Again the MoD chose to go the domestic development path, as it was the only was to meet Japan’s requirements and development expenses that were factored into the FY 2023 budget request. The MoD said it will not disclose overall procurement cost, per unit cost, and production cost because it could suggest the number of munitions procured. But the life cycle cost is expected to be 118.2 billion yen, or $911 million.

For research on UUV control technology, Japan will acquire and build two types of domestic UUVs to test out actual operations at sea, with the test UUVs meant to control smaller UUVs. UUV1 will only be a testing vehicle, while UUV2 may evolve into a mass-produced operational model once the tests are completed. Japan will also domestically develop new compact and lightweight sea mines that can be deployed from various platforms and remotely controlled. It’s unclear when these would get operationally fielded.

Development of the improved Type 12 ground-launched anti-ship missile is expected to finish by FY 2025, though the missile will deploy as soon as possible. The MoD did not detail what the improvements would be, but it has already disclosed plans to extend the range from 200 kilometers to over 1000 kilometers. The MoD included 127.7 billion yen, or $985 million, in the FY 2023 budget for both research and development, along with production and acquisition.

A new anti-ship missile will deploy on Japan’s maritime patrol aircraft to replace the existing ASM-1C and Harpoon anti-ship missiles in service, though the type and manufacture has not been disclosed. Pictures of the missiles during flight tests show that it’s likely an improved air-launched version of the Type 17 anti-ship missile. A submarine-launched torpedo with a quieter power unit will also come online, though the document did not detail whether this is an improved version of the Type 18 torpedo or a new torpedo design. It only said that the new power unit is quieter than the one in existing Type 18 torpedoes. Per unit costs were also not disclosed.

The improved version of the Japanese-produced Mitsubishi Heavy Industries SH-60K, – built under license from Sikorsky – commonly known outside the MoD as SH-60L, had an average unit production cost of 8.1 billion yen, or $62 million, as of August 2022, according to the MoD document. The life cycle cost is projected at 1248 billion yen, or $9.61 billion, when 80 aircraft are procured. Though not stated in the document, the helicopter is expected to enter service by the end of FY 2023, replacing the current SH-60Ks in service with the Japan Maritime Self-Defense Force.