Tactical aircraft—fixed-wing fighter and attack planes—provide air-to-air, air-to-ground, and electronic warfare capabilities that are vital to combat operations and homeland defense. Recent studies conducted by the Department of Defense’s (DOD) Joint Staff and the military services have found that DOD needs to modernize its tactical aircraft fleet. Seven of eight studies found that existing aircraft did not have the capabilities needed to compete in future combat scenarios and some noted the need to invest in advanced technologies to address future needs. Three of the studies, which the Navy prepared, identified shortfalls in the Navy’s capacity, or inventory of tactical aircraft.
Over the next 5 years, the military services are proposing to acquire new aircraft while modernizing existing ones. Overall, the Air Force and Navy expect to spend roughly $20 billion annually across the tactical aircraft portfolio through 2027 to develop and produce new aircraft (see figure). At the same time, the services are proposing to retire a significant number of aircraft, reducing overall tactical aircraft capacity. 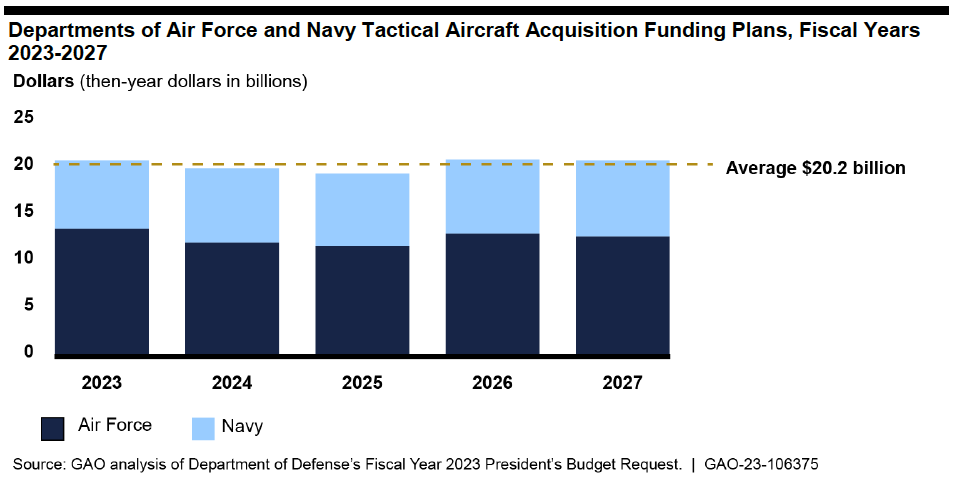 DOD is making significant development and procurement investments but has not yet conducted integrated acquisition portfolio-level analyses of its tactical aircraft platforms. GAO has long reported on needed improvements to DOD’s portfolio management practices such as collectively analyzing program interdependencies and risks. Portfolio management best practices state that comprehensive portfolio analyses should include potential tradeoffs and risks, among other things. While DOD has taken steps to improve portfolio management practices and conducted some integrated portfolio analyses, it has not yet conducted such an analysis of its fixed-wing tactical aircraft platform portfolio. Further, DOD guidance does not require that information underlying these analyses be reported to Congress. Without an analysis of the tactical aircraft platform portfolio and a requirement to report underlying information externally, DOD and Congress will continue to have limited information when making major investment decisions.

Why GAO Did This Study

Most of DOD’s existing tactical aircraft first entered service in the 1970s and 1980s and have exceeded their original service lives. As DOD seeks to modernize its tactical aircraft fleet, it must balance sustaining older aircraft currently in operation with developing and procuring more advanced capabilities to support the future force. This is a public version of a sensitive report issued in November 2022. Aircraft divestment details were deemed sensitive and have been omitted from this report.

GAO is recommending that DOD (1) conduct integrated acquisition portfolio-level analysis of all fixed-wing tactical aircraft platforms and (2) require the information underpinning that analysis be provided to Congress. DOD generally concurred with GAO’s recommendations.