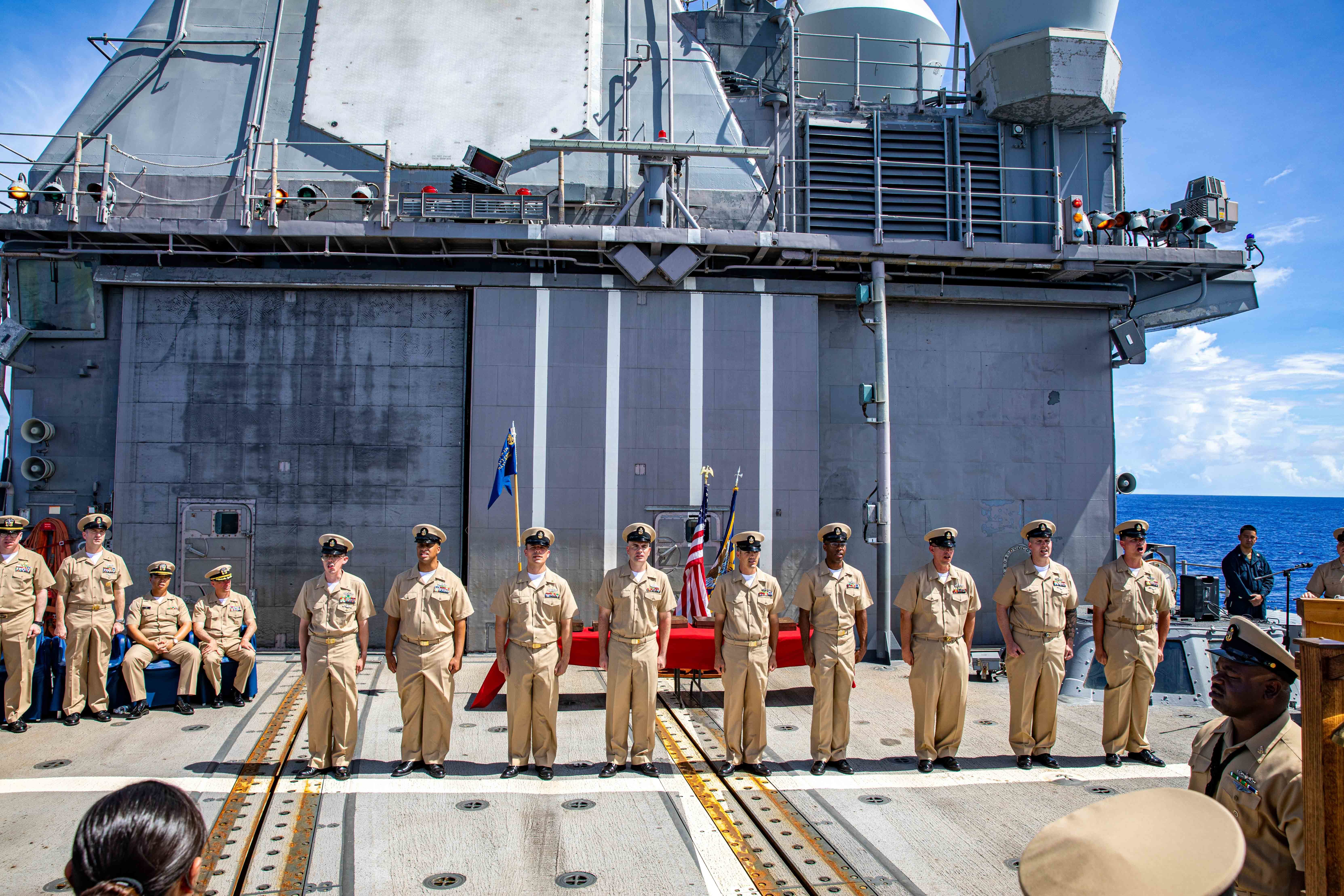 The service introduced its pilot for the senior enlisted marketplace, a sister project to the detailing marketplace assignment policy, which focused on placing sailors into more sea-intensive jobs.

Under the pilot for the senior enlisted marketplace, all eligible E-8 sailors will be automatically screened by an E-9 board, according to NAVADMIN 261/22, which announced the new policy. Sailors who are approved by the board will then be given an opportunity to apply for an E-9 position.

To advance to E-9, the sailor must match with an E-9 position, commit to serving the tour length, complete required training and report to the new position, according to the NAVADMIN.

The screening board will be given a list of all eligible E-8 sailors and will identify up to the top 15 percent of sailors as merit screened, according to the NAVADMIN. Non-eligible sailors include those in the command senior enlisted leader program, submarine force, surface nuclear, naval special warfare, reserve component or musicians.

The new advancement policy is starting with E-8 sailors, but the goal is to expand it to those looking to promote to E-7 and E-8 as well, Waters said.

“This is a fundamental shift in how we do business with respect to enlisted advancement. And we’re starting at the top of the enlisted rank,” Waters told reporters Monday. “But we think this process better aligns sailor talent with unit job requirements and seeks to advance sailors who are committed to staying Navy.”

The launch of the senior enlisted marketplace will require a shift in how the Navy thinks, said Fleet Master Chief Delbert Terrell for Personnel, Manpower and Training.

“Without a doubt, from my perspective, this is an exciting change for our Navy and we truly believe transferring the Navy enlisted advancement and distribution systems into a robust billet-based marketplace will definitely reduce our billet gaps at-sea and increase our fleet readiness to ensure that we have the right sailor with the right skills in the right billet to meet our mission,” Terrell said.

The Navy opened up a pilot in November for specific senior enlisted billets, Terrell said There were 600 applicants for less than 100 jobs. That shows that there is success with the billet-based advancement system, he said.

The change in advancement procedure is meant to address misalignment between sailor talent and positions, Waters said. There are currently about 4,000 chief petty officers in positions below their paygrade.

It will also give sailors more control over their positions, something sailors are starting to request. The marketplace will give sailors more ability to control when in the year they transfer to a new position, he said.

“The change also aims to reduce disruption to sailors’ families and commands when sailors are realigned to positions that match their pay grade outside of the normal PCS timeline as we currently [do],” Waters said.

Giving sailors more control can help them stay in the force longer, he said. This change is meant to incentivize people to stay in the force rather than retire if faced with an undesirable position or a misalignment between billet and rank.

The change to more billet-based advancement comes as the Navy faces an increasingly difficult recruiting environment. While the sea service met its retention and recruiting goals for active-duty enlisted sailors, the number of sailors it will need to recruit next year is much higher, USNI News previously reported.