The National Defense Strategy clearly points at China as the United States’ pacing threat in both the Indo-Pacific and globally with its territorial ambitions and expanding nuclear arsenal, four regional security experts said at a Center for Strategic and International Studies discussion Thursday. Christopher Johnstone, Japan chair at the Center for Strategic and International Relations, said […] 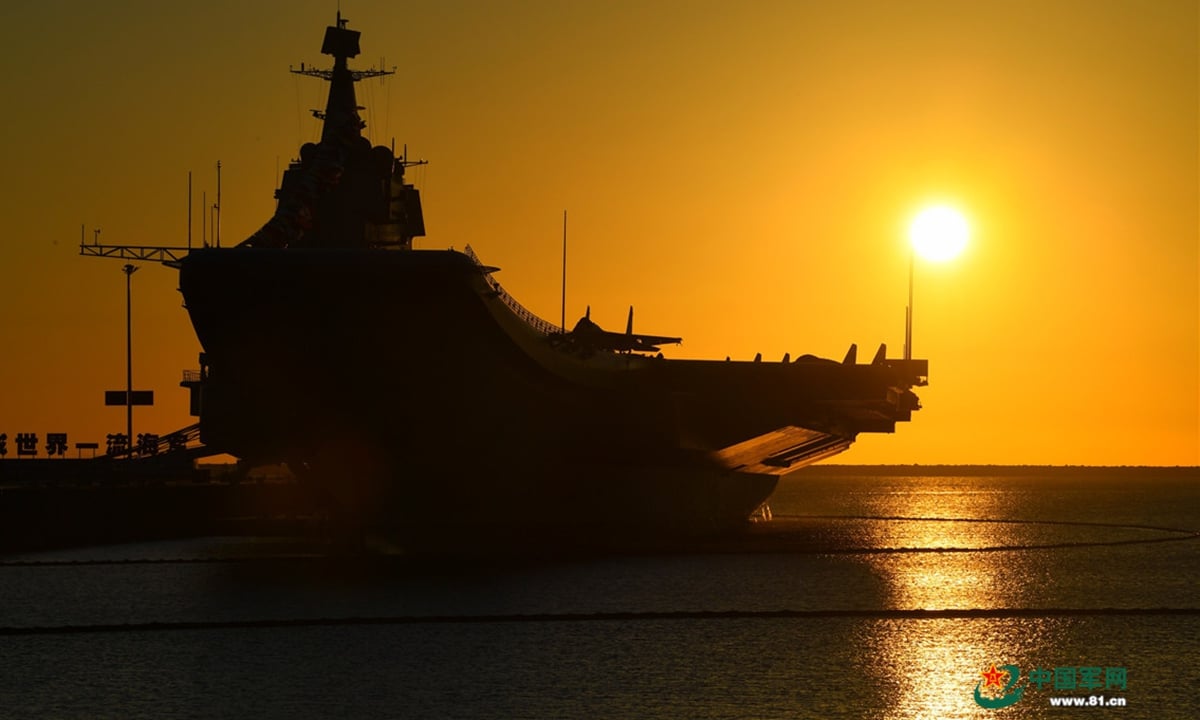 The National Defense Strategy clearly points at China as the United States’ pacing threat in both the Indo-Pacific and globally with its territorial ambitions and expanding nuclear arsenal, four regional security experts said at a Center for Strategic and International Studies discussion Thursday.

Christopher Johnstone, Japan chair at the Center for Strategic and International Relations, said he expects the strategy to be “well-received” across the Indo-Pacific. He added the strategy also now includes “a new constellation” of allies in the region that now includes the United Kingdom through the Australia-United Kingdom-United States [AUKUS] nuclear submarine and technology agreement and the Quad, the informal security and economic arrangement with Australia, Japan and India.

Defense Secretary Lloyd Austin noted several times the value of “working even more closely with our unparalleled network of allies and partners” to counter an aggressive China at a Pentagon briefing on the strategy and the accompanying nuclear posture and missile defense reviews earlier Thursday.

“The PRC [People’s Republic of China] is the only competitor out there with both the intent to shape the international order and increasingly, the power to do so,” Austin said at his press conference.

The strategies recognize the threat from Russia as “acute,” as well as those already posed by North Korea and by Iran when it is not bound by any agreement on its weapons programs and terrorists.

Shaping the international order in the future also means Beijing is investing heavily in overcoming the United States’ advantages in advanced technologies, Kari Bingen, director of the aerospace security project at CSIS, said.

China is “going after 10 mega projects,” each the equivalent of the Manhattan Project, which led to the United States development of the atomic bomb in World War II. Among the projects, she cited were artificial, intelligence, space and quantum computing.

“They clearly want to have the technological advantage” that the United States has on the battlefield, she said.

But there are areas that the defense strategy does not address, such as “how do we compete in areas that we can’t deter,” like China’s offer of development aid to build ports, airports and highways or its Huawei telecommunications giant offering 5-G networks to poorer nations, she said.

“You need to put some meat on the bones” in the National Defense Strategy through the Fiscal Year 2024 budget requests and beyond to answer that question, Bingen added. 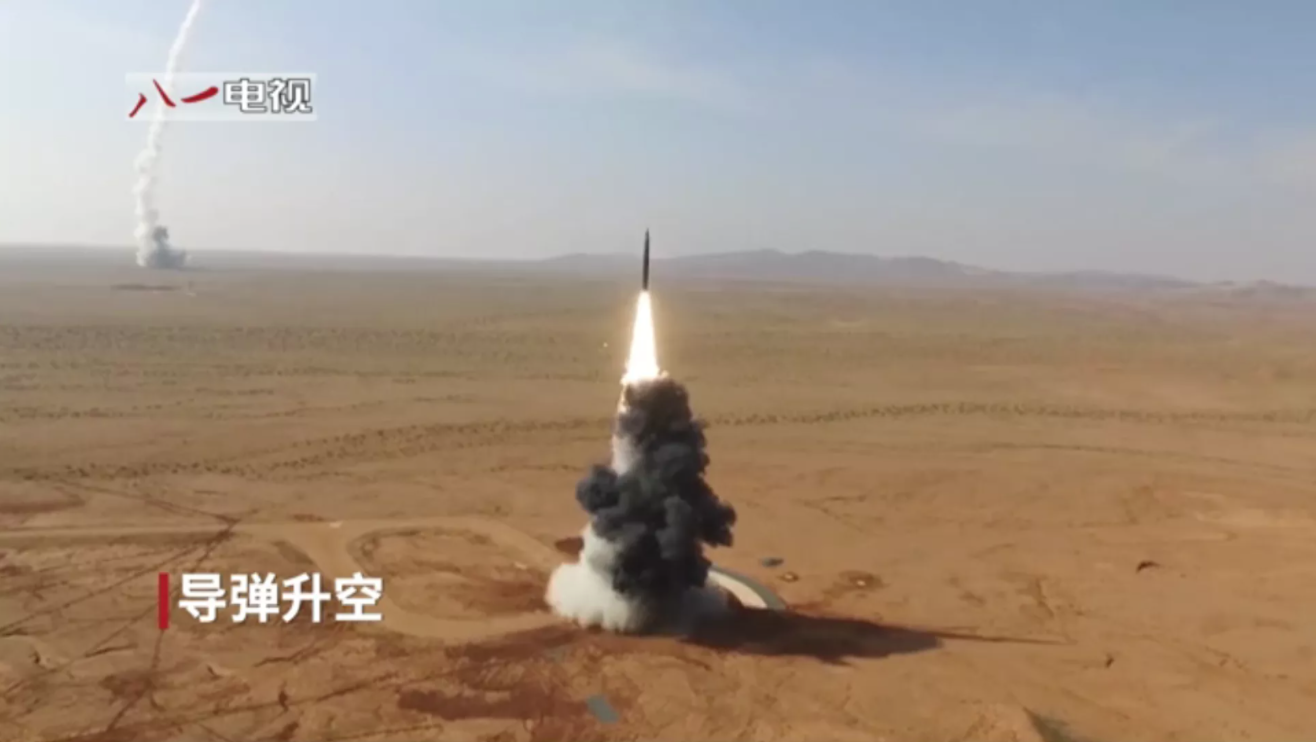 A screenshot of DF-26 launching in China.

On the direct military threat China poses, Johnstone said Beijing has made clear its intentions to take over self-governing Taiwan and also in disputes with Japan over nearby islands, South Korea and the Philippines. It is also rapidly expanding its triad nuclear arsenal.

China also “has not been shy about undermining” democratic institutions in countries across the region and using economic coercion to influence behavior, he said.

Beijing is using a “three warfares” strategy to advance its aims, not necessarily resorting quickly to armed conflict, he said. They are strict psychological warfare, public opinion and media, and legal warfare, and the goal is to “win without fighting.”

Victor Cha, CSIS’ senior vice president for Asia, said, “many of our allies and partners can learn from the Australian example” in surviving Chinese embargoes of many of its products and exports after Canberra questioned Beijing’s handling of the COVID-19 pandemic outbreak.

Along with the economic impact, China stepped up its efforts to interfere in Australia’s political process through bribes and a continuing disinformation campaign, he said.

Johnstone added that Beijing remains “principally interested” in the Pacific nearest the mainland, but is looking for a variety of opportunities to expand its influence economically through its Belt and Road infrastructure initiatives across the Indo-Pacific, in Africa where it also has a military presence in Djibouti, and into the western hemisphere.

On the Indo-Pacific’s response to Chinese moves militarily, Austin said at the Pentagon, “you see the power of partnership with a historic AUKUS agreement, with our trilateral cooperation with Japan and Korea, and with our many multinational exercises.”

Bingen said allies in Europe also recognize the threat that China poses to them as well. The EU is working with like-minded nations in the Indo-Pacific on building up domain awareness and with close allies like the United States on long-range strike and cyber.

She added NATO and EU members see that cooperation in these areas “will be just as relevant in Europe,” to deal with the Russian threat.

As encouraging as these signs of increased cooperation in the Indo-Pacific are, Johnstone noted the efforts remain “piecemeal” because there is no single alliance, like NATO, which brought a unified response to the Kremlin’s unprovoked attack on Kyiv.

On Pyongang’s threat to use weapons of mass destruction in a conflict on the peninsula, the region or against the American homeland, the Nuclear Posture Review states their use would result in “the end of that regime,” so the message is clear.

But deterrence does not work all the time, Cha said. All also cited Russia’s threat to use tactical nuclear weapons in the war in Ukraine.

By identifying North Korea as presenting a “persistent threat,” Cha said the National Defense Strategy recognizes that it one that is growing “by leaps and bounds.” He said the keystone of deterrence on the peninsula remains the presence of more than 27,000 soldiers and airmen showing Kim Jong-un “the United States will always be there.” Johnstone offered a new way to extend deterrence in North East Asia would be to “establish nuclear planning groups” with Seoul and Tokyo. 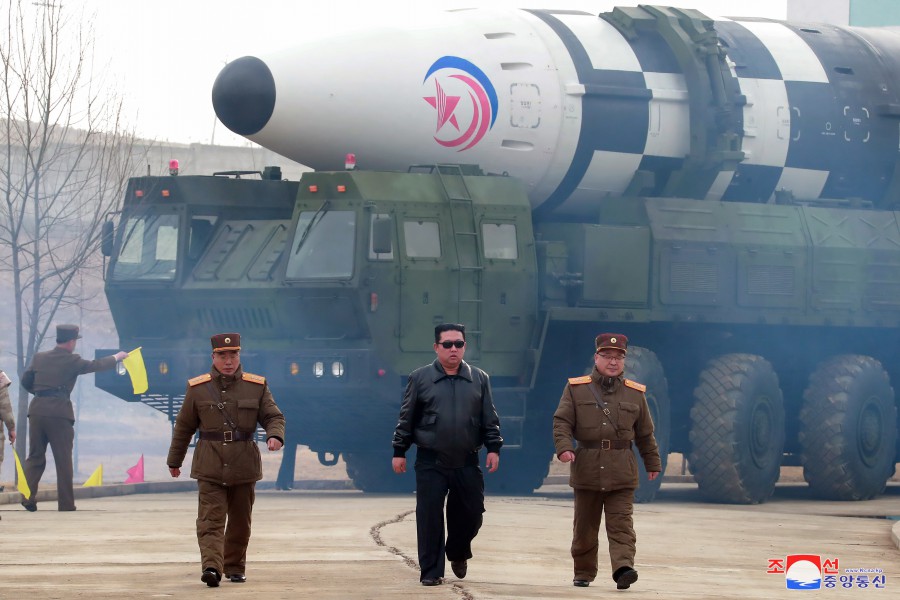 The panelists said that in looking ahead Washington and its allies should take away a number of important lessons from Ukraine especially about their defense industrial bases that apply in the Indo-Pacific as well as Europe.

“We run out of munitions pretty quickly,” Bingen said when transportation and logistics have to operate in a contested environment. The value of space rises and “we know the Chinese are targeting that.”

Seth Jones, who moderated the session, said, “we have a potential timeline issue” in producing and delivering everything from munitions to replacements for long-range strike in a war with a power like China that did not impact military operations in Afghanistan and Iraq.

Reflecting on recent state-on-state war games, Cha said, “It’s not a pretty picture [when] we run out of things pretty quickly.”