After more than 30 years in the Navy, USS Anzio (CG-68) and USS Hué City (CG-66) decommissioned this week. Anzio, which was commissioned May 2, 1992, ceremonially left the fleet on Thursday during a ceremony at Naval Station Norfolk, Va., in a ceremony attended by the current crew and plankowners of the ship. Hué City‘s decommissioning […] 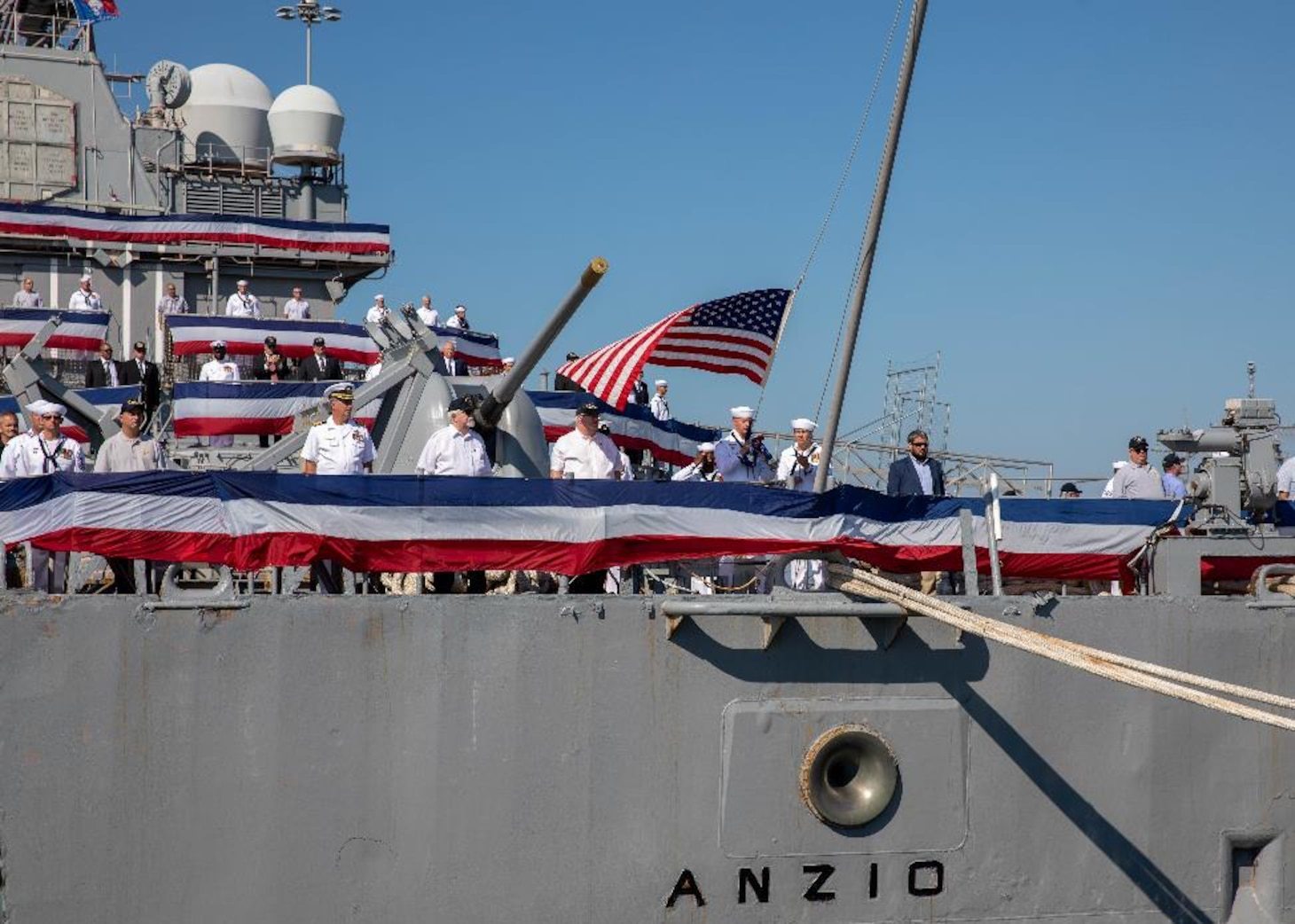 Sailors and plankowners of the Ticonderoga-class, guided-missile cruiser USS Anzio (CG-68) haul down the pennants, the jack, and the ensign during the ship’s decommissioning ceremony onboard Naval Station Norfolk, Sept. 22, 2022. US Navy Photo

Anzio, which was commissioned May 2, 1992, ceremonially left the fleet on Thursday during a ceremony at Naval Station Norfolk, Va., in a ceremony attended by the current crew and plankowners of the ship. Hué City‘s decommissioning ceremony, also held in Norfolk, was Friday.

Hué City, commissioned Sept. 14, 1991, and served 31 years in the Navy. The ship was built by Ingalls Shipbuilding and is named after a Vietnam War battle, the only warship to bear a name from the conflict.

Hué City, deployed multiple times over its 31 years of service, including providing humanitarian support in New York following the Sept. 11, 2001, attacks. Between 2002 to 2017, the ship deployed seven times in order to support Operation Enduring Freedom and other efforts in the Middle East.

“Her crew sailed with the full knowledge of the heritage that sailed with them and in striving to remain true to it, built a legacy of success of their own,” commanding officer Cmdr. Thad Tasso said in a Navy statement. “As she now takes her rightful place in our Navy’s history, I can think of no more fitting epitaph for her service than ‘she was worthy of the name she bears’.”

Anzio was built by Ingalls Shipbuilding, with her keel laying in August 1989. The ship is the second ship to bear the name Anzio, named after the invasion of Anzio and Nettuno, in Italy, during the second world war.

Over 30 years of service, the Ticonderoga-class guided-missile cruiser deployed multiple times, including on a maiden deployment in October 1994. The ship supported Operation Iraqi Freedom, according to the service. 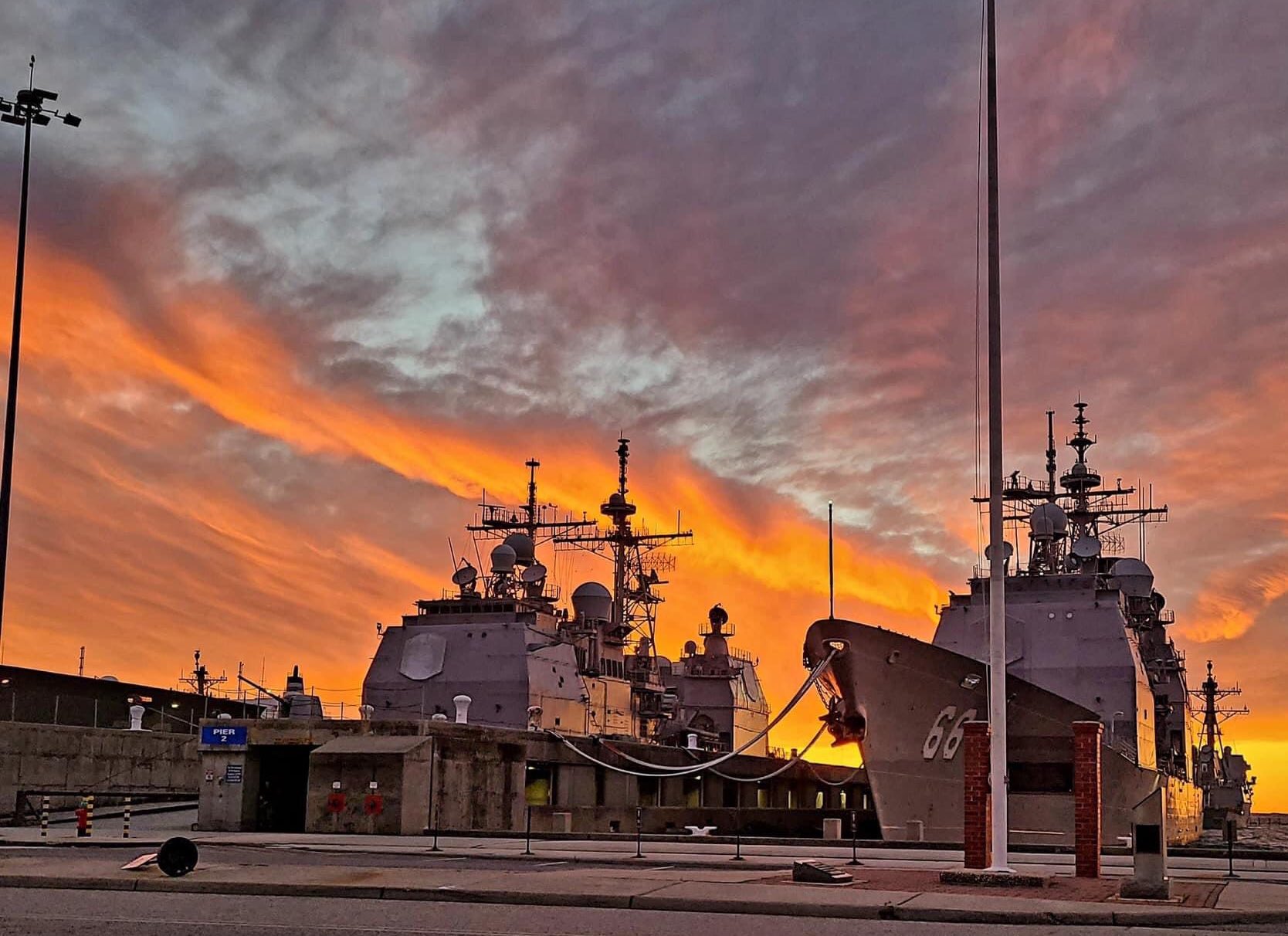 One of the Anzio plankowners at the decommissioning ceremony was retired Capt. H. Wyman Howard, the first commanding officer of the ship. When the ship was first commissioned, 400 sailors came aboard, most in the early 20s with little sea experience, he said.

“Whether you fought at the Anzio beachhead, welded a piece of her steel, supervised her construction, or gave your love and support to us during 20 months of hard work, you are a valued member of Team Anzio,” Howard said, according to a Navy statement. “Thank you for all the hours, hard work, and sacrifices you made to make this day a reality.”

Cmdr. Greg Piorun, commanding officer of Anzio, said that the ceremony marked a strong bond between the sailors who served aboard it.

“From the countless hundreds of thousands of miles traveled to the comradery cemented in foreign port calls, the one thing that holds true is the connections Anzio Sailors made with each other and the bonds that formed during their service together,” Piorun said.

Anzio and Hué City were both part of the Navy’s cruiser-phased modernization program. Anzio entered in 2017 while Hué City entered in 2018. The plan was to keep the ships at the pier in a caretaker state and then modernize them as the older in-service cruisers began to leave the fleet.

The Navy abandoned the plan as the estimated costs continued to grow and instead moved to decommission the ships as part of the Fiscal Year 2022 budget submission.

“If we were to retain those ships for two years – all seven ships – that’s roughly $2.78 billion. The cost to modernize Hue City and Anzio alone is $1.5 billion approximately,” Vice Adm. Jim Kilby told Congress in 2021.

The Navy planned to decommission five cruisers in FY 2022.