This commentary was written by Jake C. Russell, a fellow with the Advanced Research Projects Agency-Energy. The views expressed here are solely those of the author and do not necessarily represent the views of FreightWaves or its affiliates.

Freight transportation makes up nearly 10% of U.S. national emissions. Modal shift — shifting loads from less efficient to more efficient modes of transportation — has long been seen as a key strategy to decarbonizing freight. For example, moving goods by rail is about four times more efficient than truck in terms of energy per ton-mile, in large part due to the significantly lower rolling resistance between steel wheels and rails compared to rubber on road. Water transport is even more efficient, using on average five to six times less energy than a truck moving the same load.

Despite these drastic differences in energy use, 60% of all freight moves in the U.S. — 2.3 trillion ton-miles — are done by truck, according to the DOT Freight Analysis Framework. A significant fraction of these are last-mile journeys — trips less than 100 miles — which are often only able to be performed on the road. However, 90% of middle-mile trips — 100 to 250 miles — and even about 50% of long-haul journeys — more than 250 miles — are still done by truck (see below). 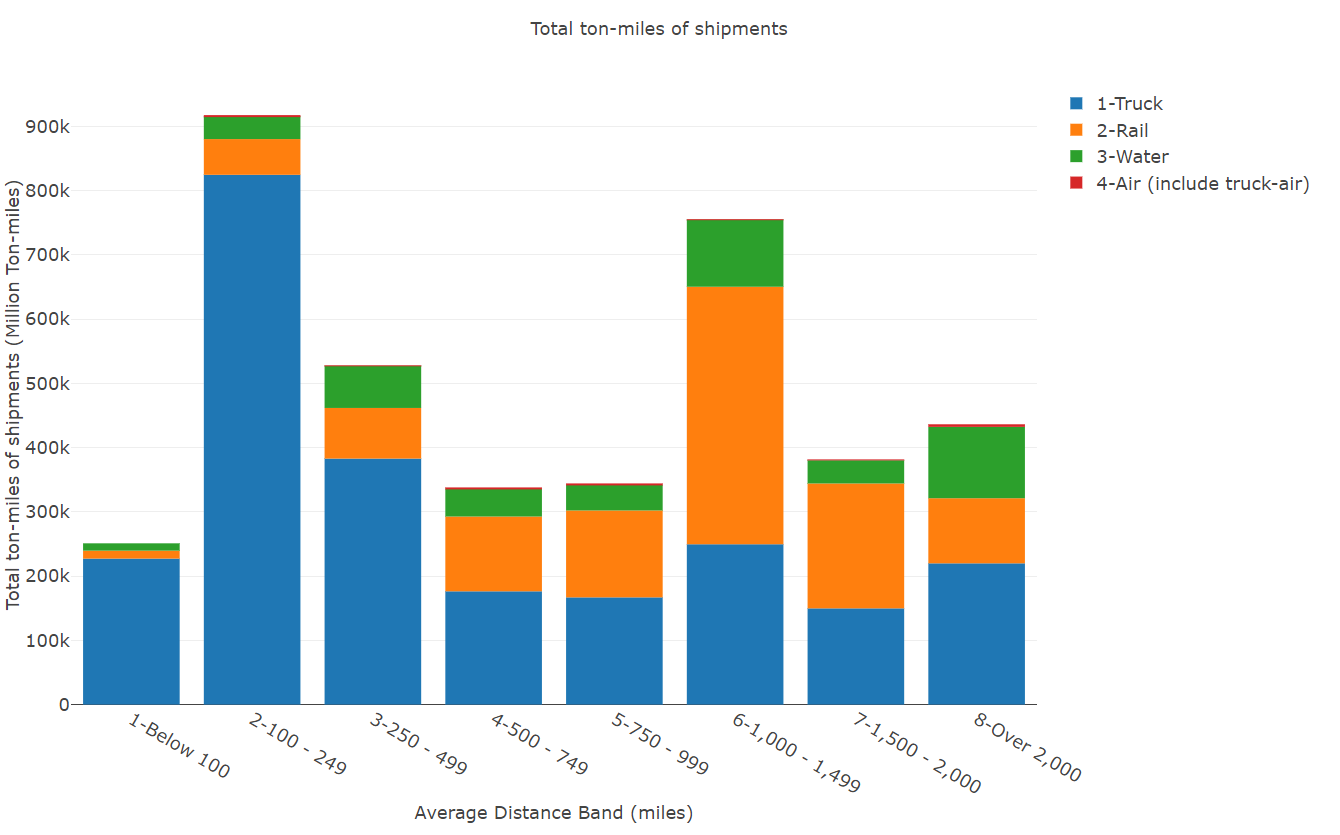 If a quarter of this traffic were switched to rail, an estimated 120 million metric tons of greenhouse gas emissions could be saved.

Considering our national geography and infrastructure, this is not an infeasible proposition. The U.S. is endowed with one of the most extensive navigable waterway networks in the world, with approximately two-thirds of the U.S. population — 200 million people — living within 100 miles of a river or coast. This is complemented by the largest freight rail network in the world, with over 140,000 miles of track that reach corners of every state except Hawaii. 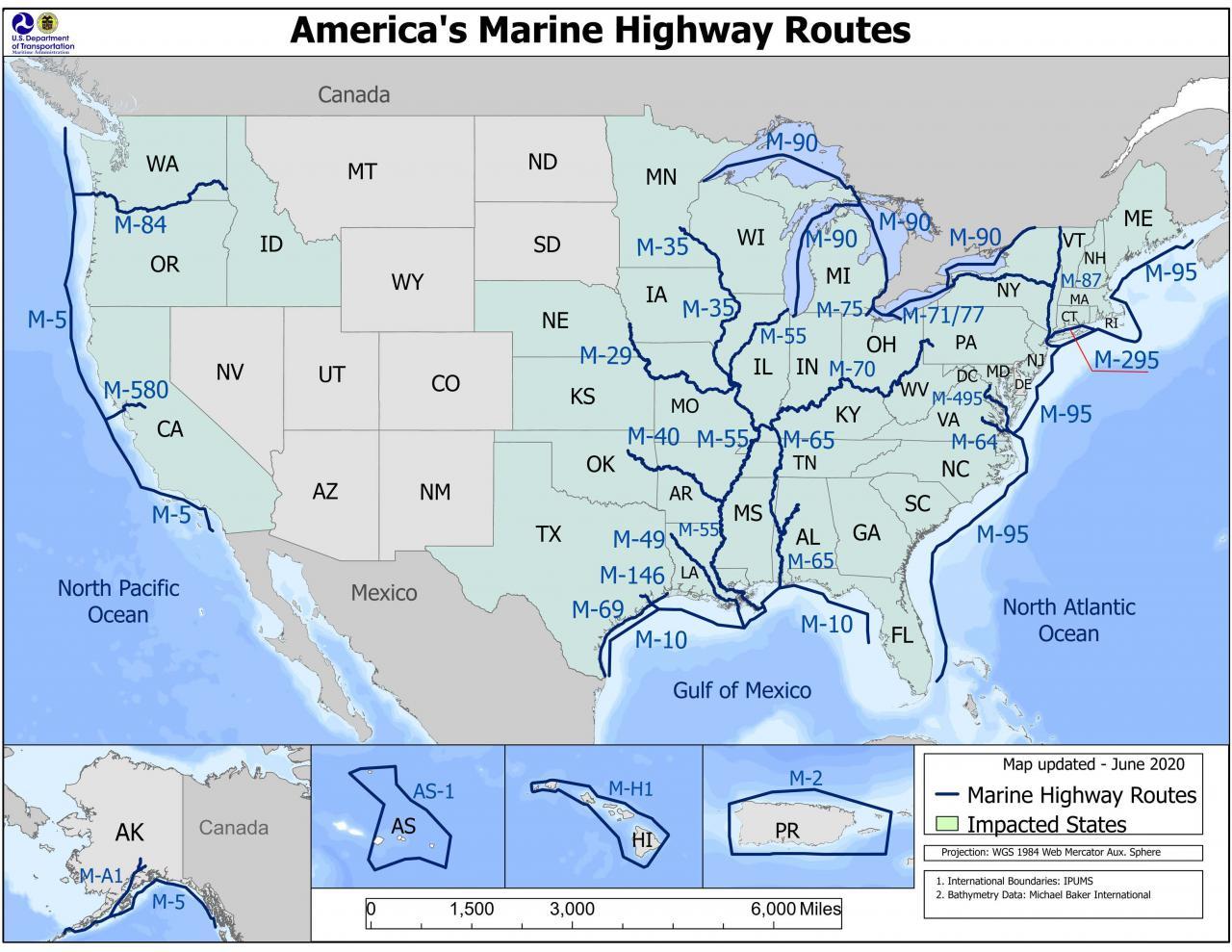 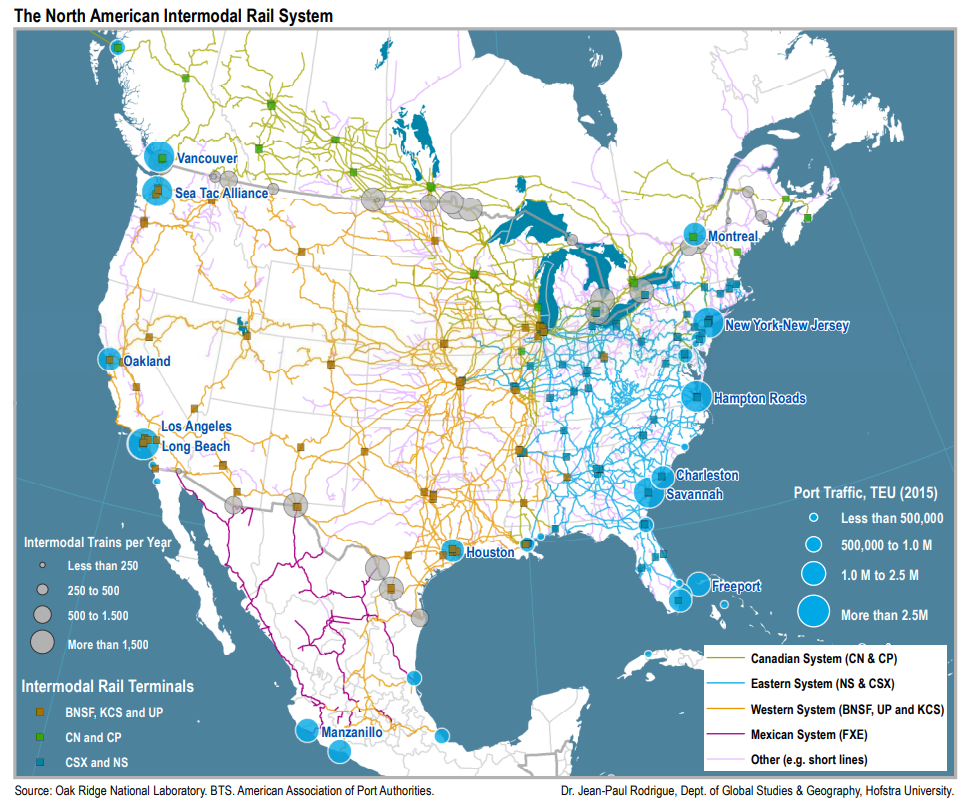 Even with the potential energy and economic savings, governments have struggled to incentivize modal shift. One factor is the large gap in service quality: Rail and water modes generally have much lower flexibility in scheduling, delivery quantity and frequency, which are highly valued in the ultra-complex and low-margin freight logistics system. Many shippers require the speed and flexibility that trucks provide, especially for high-value goods.

Historically, maritime and rail shipping have trended toward larger and larger ships or trains in pursuit of the better operating ratios offered by economies of scale. This has driven down costs at the expense of service quality. The trade-off can be seen clearly in the move toward precision scheduled railroading: Over the past decade, average train lengths have increased by 25%. In the maritime industry, the advent of 20,000-TEU mega-ships has contributed to a doubling of average vessel capacity in just 15 years. 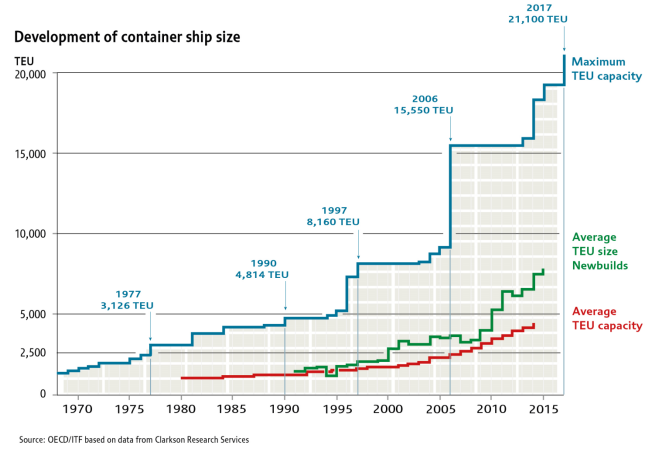 While these developments (generally, aggregation) have indeed led to enormous efficiency increases for the cargo industries, they have also had negative consequences that make modal shift more difficult — longer wait times, higher risk of disruption, reductions in available routes and consolidation into fewer intermodal terminals and ports. This consolidation means that many parts of the logistics network have reached capacity, while others are severely underutilized. The supply chain crisis has amplified these problems, with high-profile events like the Suez Canal blockage and Port of Los Angeles backup providing stark examples of the drawbacks of aggregation.

Recognizing this, a nascent movement toward disaggregation is taking root in the maritime and rail industries. Disaggregation is the de-scaling of cargo vehicles into smaller moving units in order to provide faster and more flexible service. Smaller units could mean anything from a single container to dozens on one vehicle — the ideal size would vary depending on route, cargo and applications.

Disaggregated modes could make fuller use of underutilized rail lines, rivers and ports, distributing traffic across the network, reducing burden on major thoroughfares and moving away from the single points of failure inherent to hub-and-spoke systems. Without having to wait for hundreds or thousands of containers to assemble, shipments could be made more regular with fewer delays. Ultimately, the goal of disaggregation is to get cargo closer to the destination with more efficient modes, minimize travel on the road and reduce overall energy use of the transportation system.

Disaggregation is not meant to overturn the traditional logistics system but instead fill in its gaps. Very long-haul transport, where flexibility is not required (transoceanic or transcontinental), should still be scaled up for maximum efficiency. Similarly, trucks will likely still be required for last-mile delivery and to get to those spots that rail and water cannot reach.

This paradigm shift is enabled by several convergent technology developments. Autonomous vehicle technologies, primarily driven by the over-the-road sector, enable freight disaggregation by eliminating the need for labor efficiency. Traditionally, as vessel or train size decreases, labor makes up a larger and larger portion of the operating costs. Full autonomy, however, would mean that this no longer has to be a factor when making decisions on scale. Autonomy for rail and water may be coming soon: Driverless locomotives have already been tested on remote routes in Australia. In the maritime market, autonomous technology has been advancing more slowly, as labor costs for large ships are already relatively low and international regulatory positions remain murky, but several demos have been deployed.

Vehicle electrification is another trend that enables a move toward disaggregation. With internal combustion engines, a larger engine leads to higher transport efficiency — the increased cylinder volume-to-surface area ratio means that less energy is lost as heat. For electric motors, this is less of a factor, enabling the scaling down of vehicles without a proportional loss in efficiency. Another related benefit of disaggregation is that smaller vehicles are easier to decarbonize, being more amenable to battery electrification and reducing reliance on uncertain supplies of zero-carbon fuels.

There are already several startups attempting to disrupt the freight industry by putting this concept into practice. Parallel Systems and Intramotev are developing autonomous, battery-powered railcars that can move independently or in unison. In maritime, FleetZero is attempting to decarbonize short-sea shipping with small container ships powered by swappable batteries. Zulu Associates works to relieve urban freight congestion by utilizing small-scale water transport. Even the U.S. military has been exploring this concept: A recent DARPA program is developing small autonomous supply vessels that can convoy for drastically enhanced range.

Putting it all together

Disaggregated options also enable some nonobvious synergies. Convoying or platooning of individual vehicles could be used to gain back some of the efficiencies of scale lost by disaggregating. In the same way that cyclists can save energy by drafting behind one another, platooning reduces air drag and turbulence, especially at higher speeds. Some trucks are already using this technique on highways to save an average of 7% fuel use, and it’s expected to become more common with autonomy. Railcars will be able to make better use of this due to their closer following ability, but platooning is significantly more beneficial for waterborne vessels. By forming triangular squadrons and “surfing” on the wake of the leading vessel, ship platoons have been able to achieve 20% to 40% efficiency increases. Because squadrons and convoys of smaller vehicles could form and deform dynamically along routes, they retain the flexibility and speed benefits of disaggregation, while avoiding the need for lengthy physical assembly of aggregated modes.

Another opportunity for disaggregated freight disruption is in intermodal transfer. Currently only a handful of ports are equipped to handle the depth and width of the largest ships, leading to increasing traffic concentration into these few ports. Upgrades to accommodate these ships can cost hundreds of millions of dollars. In rail, longer trains lead to bottlenecks at large terminals, with more marginal terminals seeing reduced service. Smaller, disaggregated transport options would enable the full extent of our port and rail network to be utilized, breathing new life into neglected intermodal infrastructure. It’s even possible to envision doing away with centralized ports and rail yards altogether — new equipment in the form of deployable microports or microterminals could allow containers to be shifted directly from rail or ship to truck, and vice versa, anywhere two routes converge.

Disaggregation could be accelerated by rail and maritime shipping industries seeking out opportunities to build and test smaller vehicles — and by embracing business model innovations enabled by autonomy and electrification. Nascent efforts by entrepreneurs to embody this new paradigm may be of significant interest to investors, and regulators should begin to think about how disaggregated modes can be integrated into current frameworks. The speed, modularity and flexibility enabled by smaller transport options could encourage a systemic modal shift, which, combined with the ongoing moves toward efficiency, electrification and zero-carbon fuels, will keep both our supply chains and decarbonization plans running on schedule.

Jake Russell is a fellow with the Advanced Research Projects Agency-Energy, the U.S. Department of Energy’s moonshot innovation office. He earned his doctorate in materials chemistry from Columbia University and earned a bachelor’s degree in chemistry and a minor in molecular engineering from the University of Chicago. His interests include freight and maritime decarbonization, logistics efficiency and ocean carbon dioxide removal.