The Navy and Marine Corps will keep their Ospreys flying after the Air Force grounded its fleet of the tilt-rotor aircraft. Both services said they are keeping an eye on a clutch issue that led the Air Force to halt operations for the CV-22 Ospreys flown by Air Force Special Operations Command. “All Navy CMV-22 […] 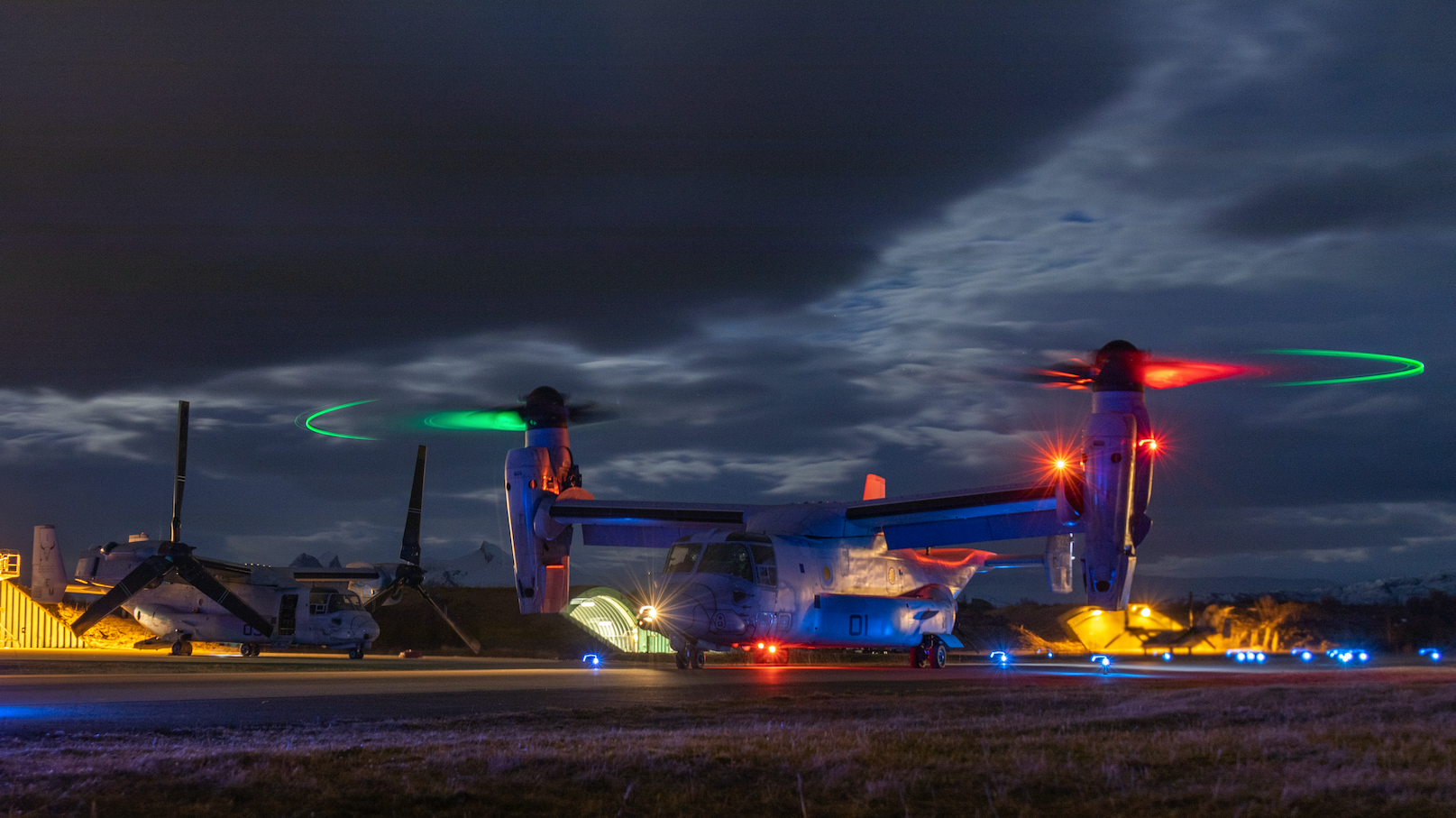 U.S. Marines prepare to take off in a MV-22B Osprey at Norwegian Air Force Base Bodø during Exercise Cold Response 22, Norway, March 16, 2022. US MArine

The Navy and Marine Corps will keep their Ospreys flying after the Air Force grounded its fleet of the tilt-rotor aircraft.

Both services said they are keeping an eye on a clutch issue that led the Air Force to halt operations for the CV-22 Ospreys flown by Air Force Special Operations Command.

“All Navy CMV-22 Osprey units continue to conduct operations throughout the fleet. We are aware of the issues affecting other Osprey variants and are closely monitoring our CMV-22 aircraft for similar occurrences,” Cmdr. Zach Harrell, a spokesperson for Naval Air Forces, told USNI News in a statement.

In a call with reporters on Thursday, a Marine Corps official acknowledged the clutch problem could affect all three Osprey variants, but said it has not happened to any of the Navy’s CMV-22Bs. The Navy only started deploying its CMV-22Bs last year, while the Marine Corps and Air Force have been flying their respective variants for much longer.

“The hard clutch issue has been known to the Marine Corps since 2010, and as such, we have trained our pilots to react with the appropriate emergency control measures should the issue arise during flight. We also remain engaged with the Joint Program Office, NAVAIR engineering, and our industry partners to resolve the issue at the root cause,” Maj. Jim Stenger, a Marine Corps spokesman, said in a statement.
“By virtue of these measures, the Marine Corps has accumulated over 533,000 MV-22 flight hours without a single catastrophic event contributed to this hazard. The Deputy Commandant for Aviation has also issued interim guidance to the Fleet Marine Forces implementing a procedure to help in the early recognition of a pending hard clutch engagement. Additionally, we will continue to proactively communicate our ongoing efforts with the men and women who fly and maintain our aircraft. They deserve nothing less.”

A spokesperson for Naval Air Systems Command said the command, Bell Boeing – the industry team that builds the Ospreys, – and the Joint Program Office are trying to figure out the source of the problem.

“Naval Air Systems Command and the V-22 Joint Program Office (PMA-275) have been working with our Bell Boeing industry partners on a known V-22 Aircraft clutch issue. While root cause remains under investigation, we are implementing additional risk mitigation controls to ensure the safety of our Service Members,” Marcia Hart said in a statement.
“The program office continues to communicate and collaborate with all V-22 customers, including allied partners. The safety of pilots and air crews is our number one priority.”

The decisions from the Navy and Marine Corps come after Breaking Defense reported Wednesday that the Air Force halted operations for its fleet of CV-22 Ospreys following two recent instances in which aircraft experienced problems with the clutch.

The first Marine Corps official said performing hover checks, when the aircraft is using less power and operating within a rotor’s distance of the ground, will help mitigate issues with the clutch. That official said the Joint Program Office is likely one to three years away from finding a materiel solution to the problem.