The 1st Marine Division is investigating a training incident after a new Amphibious Combat Vehicle overturned in heavy surf Tuesday as it approached a beach at Camp Pendleton, Calif., officials confirmed to USNI News on Wednesday. No Marines were injured in the incident, which happened at about 8 a.m. local time during a training exercise […] 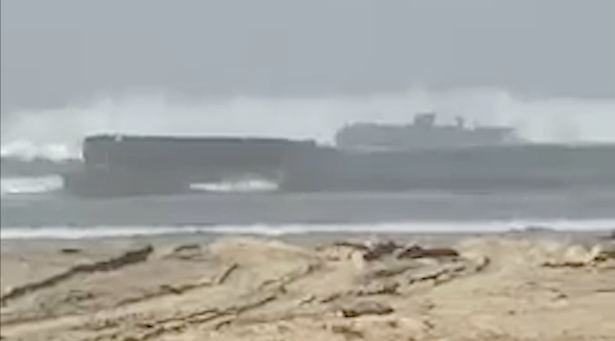 Disabled ACVs on July 19, 2022 off the coat of California

The 1st Marine Division is investigating a training incident after a new Amphibious Combat Vehicle overturned in heavy surf Tuesday as it approached a beach at Camp Pendleton, Calif., officials confirmed to USNI News on Wednesday.

No Marines were injured in the incident, which happened at about 8 a.m. local time during a training exercise at the southern California base, the Division said in a statement.

“One Amphibious Combat Vehicle (ACV) tipped onto its side in the surf zone and another ACV became disabled” during the training, according to the statement. “Marines in both ACVs conducted their immediate action drills and safely returned to shore. One vehicle was towed ashore and recovery efforts for the other vehicle are ongoing.”

The ACVs belong to 3rd Assault Amphibian Battalion, part of 1st Marine Division. It’s not clear which subordinate unit was involved in the incident. A request for additional information was pending with the division spokesman, 2nd Lt. Noah Richardson. The ACVs were not attached to the 13th Marine Expeditionary Unit, which is preparing to deploy later this year with the Makin Island Amphibious Ready Group, USNI News understands.

The National Weather Service had issued a high-surf advisory along the coast in San Diego and Orange counties, which would include Camp Pendleton’s beaches on its 16-mile shoreline along the Pacific, north of the coastal city of Oceanside. Eight-foot surf was reported in places that were ideal conditions for surfers but less so for anyone traversing the surf breaks, “with occasional sets of 9 to 10 feet,” according to the Tuesday morning advisory, which also noted strong rip currents. A tropical storm spinning southwest of the region and big southwest swells that began last week in the south Pacific have fueled big surf across the Pacific.

“We still have a high-surf advisory in effect … that’ll continue through tomorrow morning,” said NWS meteorologist James Brotherton in San Diego. “The biggest we’ve had is 10 feet at Oceanside.” The height of the waves breaking on shore “can vary from hour to hour,” Brotherton added.

The ACV crews encountered overhead waves Tuesday morning as the vehicles approached the wide, sandy beach and morning fog was pulling offshore, according to a video obtained by USNI News.

A pair of white safety boats were maneuvering inside the breaking surf where the ACVs were moving toward shore when one of the vehicles turns and is broadsided by a breaking wave. Several Marines can be seen jumping off the vehicle into the water and later floating in the white, churning foam, as another ACV is overturned in a shallower area nearby.

The incident comes almost two years after the fatal sinking of an amphibious assault vehicle, resulting in the deaths of eight Marines and a Navy corpsman. The AAV sunk while it was returning from San Clemente Island to amphibious transport dock USS Somerset (LPD-25). Investigations found a long line of failures and lack of adherence to safety procedures and standard operation procedures were responsible directly or in part for the deaths. These include the lack of water safety and egress training, inadequate safety gear, poorly done or lack of safety briefs, and no dedicated safety boat accompanying the vehicles during the waterborne operations.