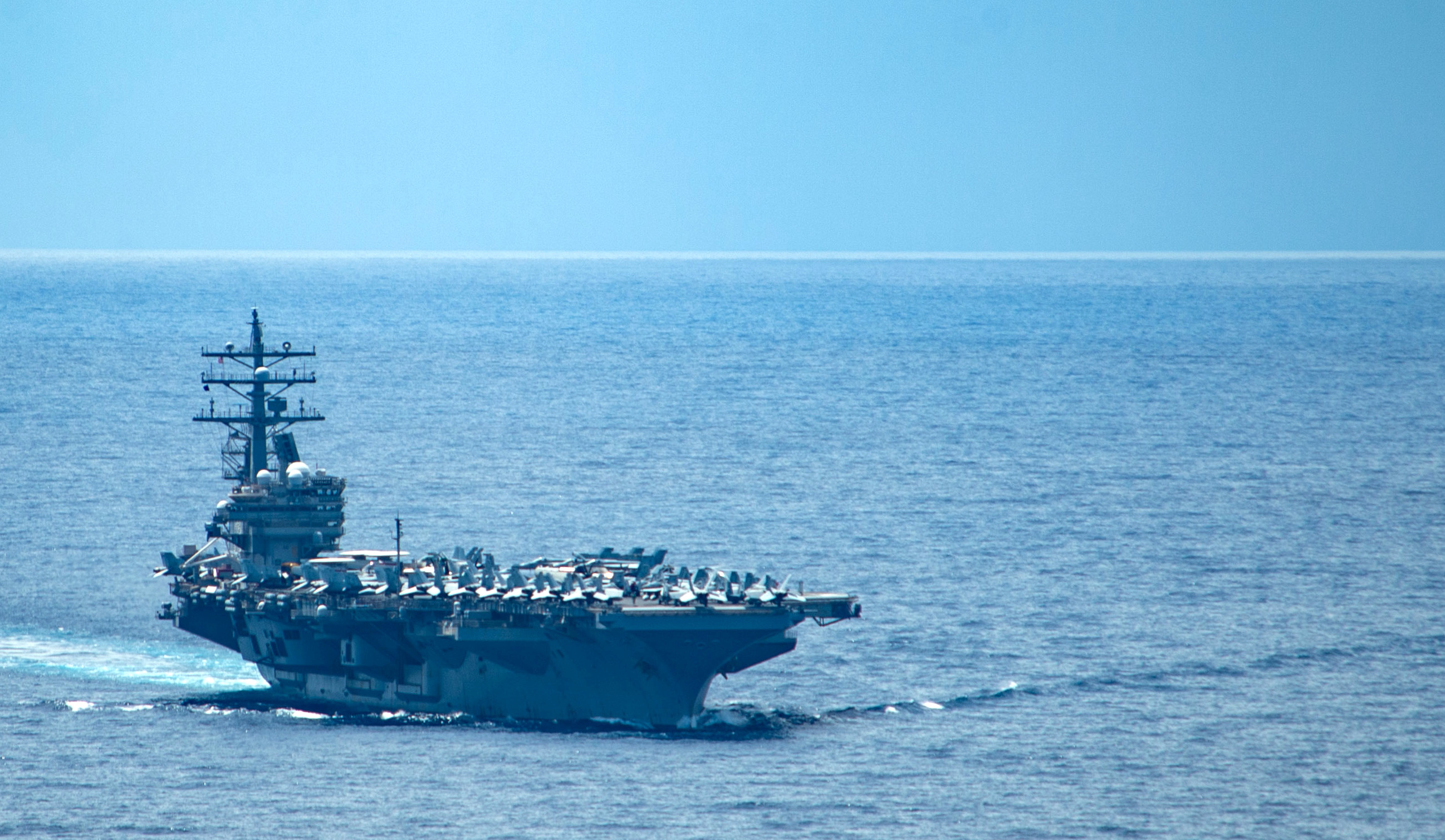 USS Ronald Reagan (CVN-76) steams through the Balabec Strait and into the South China Sea on July 12, 2022. US Navy Photo

The Ronald Reagan Carrier Strike Group is now operating in the South China Sea, according to a 7th Fleet release on Wednesday.

USS Ronald Reagan (CVN-77) began operating in the South China Sea around the same time USS Benefold (DDG-65) made a Freedom of Operation navigation around islands in the body of water, drawing ire from Beijing, USNI News reported.

The strike group will conduct maritime security operations, including coordinated tactical training between air and surface units, according to the release.

“Our strike group works consistently to stay capable and ready and we continue that focus during operations in the South China Sea to demonstrate our commitment to the region,” said Rear Adm. Michael Donnelly, commander, Task Force 70/Carrier Strike Group 5, in the release “Building on the lessons and successes of exercises like Valiant Shield 2022, and our continuous opportunities to train and operate alongside allies and partners, we provide assured capability to uphold the rules-based international order in this body of water and anywhere else we will sail, fly, and operate.”

Royal Australian Navy (RAN) submarine HMAS Collins (SSG73), which recently made a port visit to Royal Malaysian Navy base Kota Kinabalu, is also operating in the South China Sea. It is likely the visit was made prior to the social media post.

Kota Kinabalu is the eastern fleet headquarters for the Royal Malaysian Navy, as well as home to the navy’s submarine command and its homeport for the only submarines, the Scorpene-class submarines KD Tunku Abdul Rahman and KD Tun Razak. As such, the RMN’s submarine related engagements with partner nations are usually conducted there.

On Monday, a Russian Navy intelligence ship transited the Tsushima Strait after previously operating around the southern waters of Japan since July 6, according to releases from Japan’s Ministry of Defense.

On Saturday, the Joint Staff Office (JSO) of the Ministry of Defense said Russian Vishnya-class intelligence ship with the hull number 535 was sighted at 7 a.m. sailing northeast in an area about 110 km east-northeast of Miyako Island. Although the release did not give the ship’s name, the hull number given and image provided identifies the ship as Kareliya, which is part of the Russian Pacific Fleet.

Kareliya subsequently sailed through the Miyako Strait into the East China Sea and that the Russian ship was monitored by the Japan Maritime Self Defense Force minesweeper JS Kuroshima (MSC-692) and JMSDF P-3C Orion Maritime Patrol Aircraft (MPA) of Fleet Air Wing 5 of Fleet Air Wing 5 operating out of Naha Air Base, Okinawa, according to the release.

The Russian ship was spotted 1 a.m. Monday traveling northeast in an area 130 km west of the Danjo Island and subsequently sailed northeast through the Tsushima Strait into the Sea of Japan, according to a subsequent release by the JSO. Multipurpose support ship JS Amakusa (AMS-4303) and a JMSDF P-1 MPA of Fleet Air Wing 4 operating from Naval Air Facility Atsugi, Honshu, monitored Kareliya. Both releases noted the previous activity of the Russian ship, stating that the ship had been seen on July 6 sailing west in the contiguous zone of Okinotori Island.

A People’s Liberation Army Navy (PLAN) frigate operated around the Senkaku Island from Thursday to Sunday, according to another Monday Japanese release.

A PLAN Jiangwei II class frigate was seen sailing 1 p.m. July 7 southward 80 km west-northwest of Uotsuri Island, part of the Senkaku Islands, according to the release. The hull number and image provided in the release identifies the ship as CNS Huaihua (566).

The Senkaku Islands, known as Diaoyu by China and Diaoyutai by Taiwan, are a chain of small, uninhabited islands located approximately 186 km northeast of Taiwan and around 410 km west of Okinawa, Japan. Despite claims from both China and Taiwan, Japan administers the islands.

Destroyer JS Kirisame (DD-104) will conduct a Pacific Partnership at Sea search and rescue exercise alongside the Republic of Palau Division of Maritime Law Enforcement (DMLE), Royal Navy, U.S. Navy and the U.S. Coast Guard from July 15-19 around Palau, according to a Tuesday JMSDF release.

Pacific Partnership, now in its 17th year, is an annual multinational humanitarian assistance and disaster relief preparedness mission that is conducted in the Indo-Pacific region and led by the United States Indo-Pacific Command.

Kirisame is the second surface force of the JMSDF Indo-Pacific Deployment 2022 (IPD22) mission.

The first surface force, comprised of helicopter destroyer JS Izumo (DDH-183) and destroyer JS Takanami ((DD-110), are now in Hawaii for the Rim of the Pacific 2022 (RIMPAC2022) exercise.

In other developments, China and Pakistan are holding the joint exercise Sea Guardian 2 in the waters off Shanghai. The exercise began Sunday at Wusong, Shanghai, with the planning and harbor phase and transited to the at sea phase on Tuesday. The exercise concludes on Thursday.

Chinese ships and units involved in the exercise are the frigates CNS Xiangtan (531) and CNS Shuozhou (610), supply ship Qiandaohu (886), and one submarine along with one airborne early warning and control aircraft, two fighter jets and one helicopter.

Pakistan is represented by the frigate PNS Taimur (262). Taimur is the second of four Type 054A/P frigates ordered by Pakistan from China and commissioned in China on June 23, 2022.

This is the second Sea Guardian exercise between China and Pakistan with the first held in January 2020 in the Arabian Sea.

Over in New Zealand, the Royal New Zealand frigate HMNZS Te Mana (F111) returned to New Zealand on Friday following the completion of a three-year upgrade program in Canada.