Three Russian ships that sailed through the Senkaku islands Monday were sighted transiting the Tsushima Strait into the Sea of Japan on Tuesday night, with two of the ships completing a voyage around Japan that began June 15. Meanwhile, a Russian intelligence ship was sighted operating in the contiguous zone of Okinotori Island in the […] 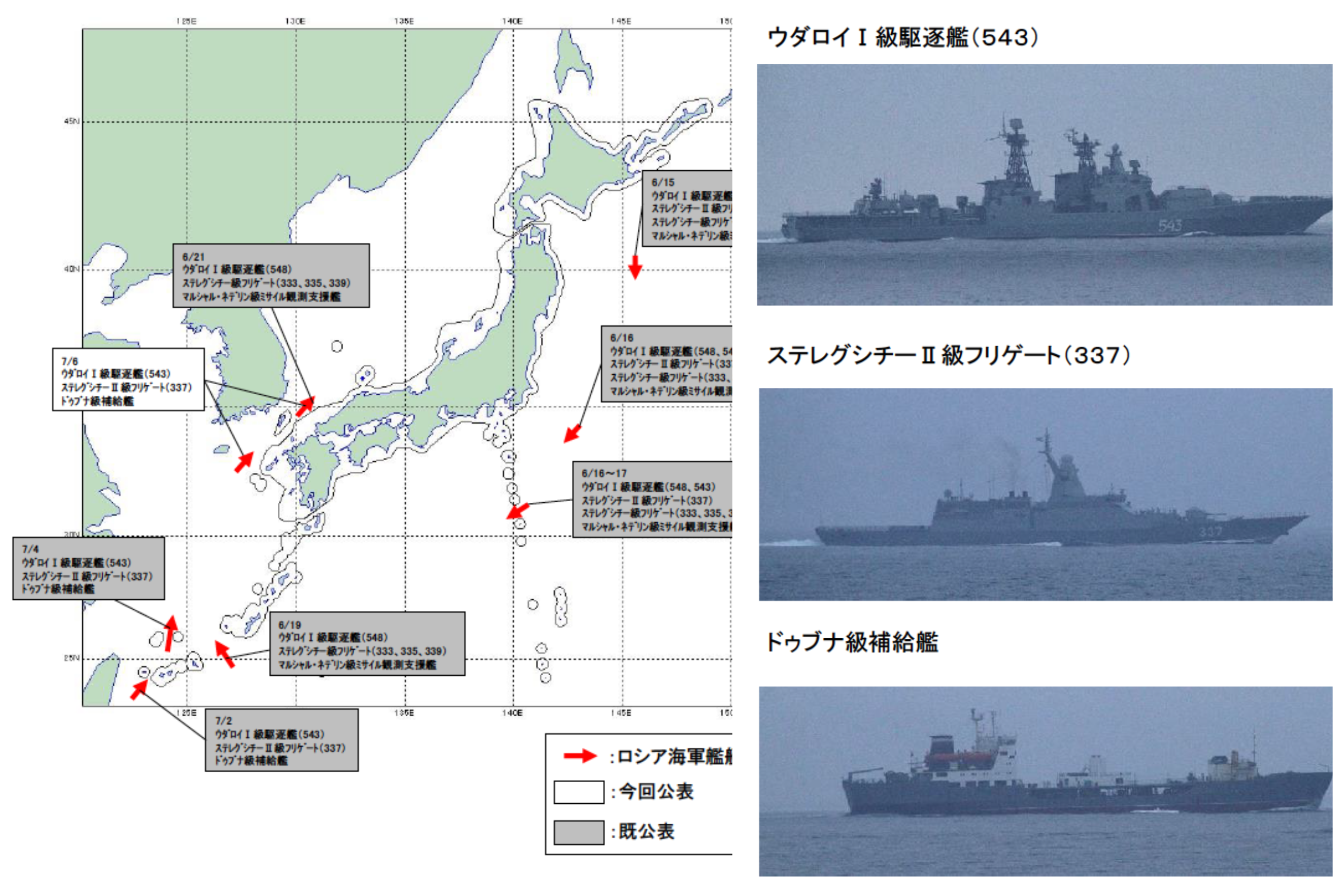 Three Russian ships that sailed through the Senkaku islands Monday were sighted transiting the Tsushima Strait into the Sea of Japan on Tuesday night, with two of the ships completing a voyage around Japan that began June 15.

Meanwhile, a Russian intelligence ship was sighted operating in the contiguous zone of Okinotori Island in the Philippine Sea on Wednesday.

Marshal Shaposhnikov and Gremyashchiy had been part of a seven-ship Russian surface group operating near Japan since June 15 with the remaining ships of that group having transited the Tsuhima Strait on June 21. The Russian ships are likely sailing home to Vladivostok following an extensive series of exercises by the Russian Pacific Fleet that began in early June.

The Joint Staff Office (JSO) of the Ministry of Defense issued a release on Wednesday stating that at 11 p.m. Tuesday, the three Russian ships were sighted traveling northeast in an area about 90 km west of the Danjo Islands and subsequently sailed into the Sea of Japan through the Tsushima Strait.

The release included a map showing the earlier sightings of the Russian ships and stated that the Russian ships were monitored by the Japan Maritime Self Defense Force (JMSDF) fast attack craft JS Shirataka (PG-829) along with a JMSDF P-1 Maritime Patrol Aircraft (MPA) of Fleet Air Wing 1 stationed at JMSDF Kanoya Air Base and a JMSDF P-3C Orion MPA of Fleet Air Wing 5 operating out of Naha Air Base, Okinawa.

The JSO issued a second release stating that at 5 a.m. Wednesday, a Russian Vishnya-class intelligence ship with the hull number 535 had been sighted sailing west 45 km south-southeast of Okinotori Island. The hull number given identifies the ship as Kareliya, which is part of the Russian Pacific Fleet. The release added that the Russian ship then sailed west in the contiguous zone of Okinotori Island and, after leaving the area, sailed further west.

Article 33 of the United Nations Convention of the Law of the Sea defines the contiguous zone as an area contiguous to a state’s territorial sea. Under the U.N. article, the coastal state may exercise the control necessary to prevent infringement of its customs, fiscal, immigration or sanitary laws and regulations within its territory or territorial sea and punish infringement of the above laws and regulations committed within that area. The contiguous zone may not extend beyond 24 nautical miles from the baselines from which the breadth of the territorial sea is measured.

Okinotori Island is the southernmost part of Japan and lies directly between Taiwan and Guam.

Japan maintains a Marine Research Station there and claims that the island allows Japan a 200nm Economic Exclusion Zone, though this claim has been disputed by China, Taiwan and the Republic of Korea.

In other developments, the JMSDF destroyer JS Kirisame (DD-104) departed Tuesday for Sasebo naval base as the second surface force of the JMSDF Indo-Pacific Deployment 2022 (IPD22) mission.

July 5, the Indo-Pacific Deployment Force, composed of JS KIRISAME, departed from Sasebo base. The Self-Defense Fleet contributes to the peace and stability of the Indo-Pacific region. #FOIP #IPD22 pic.twitter.com/oaqi1drL4p

The first surface force, comprising of helicopter destroyer JS Izumo (DDH-183) and destroyer JS Takanami ((DD-110) are now in Hawaii for the Rim of the Pacific 2022 (RIMPAC2022) exercise.

Kirisame will visit 10 Indo-Pacific countries for the IPD22 deployement to conduct various engagements. Kirisame will conduct a port visit to Koror, Palau, from July 11-19, and from July 20-22, it will conduct at sea training with the Palau Coast Guard patrol boats PSS Kedam and PSS Remerik II, according to a Friday JMSDF press release.

From 4 to 6 July, JS ASAHI conducted a trilateral exercise with the USS DEWEY and HMAS PARRAMATTA in East China Sea to East of Okinawa.@US7thFlt @Australian_Navy

Parramatta is currently operating around Japan on a regional presence deployment, which includes conducting surveillance operations for at-sea violations of the United Nations sanctions on North Korea.

In other developments, two Royal Canadian Air Force (RCAF) CP-140 Aurora MPAs arrived on Wednesday at Marine Corps Base Hawaii, Kaneohe Bay, Hawaii, to participate in the RIMPAC exercise. The RCAF announced later on social media on Thursday of the aircrafts’ departure for RIMPAC and, in a later post on Friday, reported the number of aircraft taking part.

RCAF CP140 Auroras are departing 19 Wing Comox, BC, bound for #RIMPAC2022 in Hawaii. They will join members of 25 other nations taking part in the world’s largest international maritime exercise. #CapableAdaptivePartners pic.twitter.com/5zJBSQ8O4S

Members of the RCAF long range patrol squadrons are arriving at @MCB_Hawaii for #RIMPAC2022. Two CP140 Auroras will be taking part in the month-long exercise, conducting surface and subsurface warfare and intelligence, surveillance and reconnaissance missions. pic.twitter.com/NLKofDAQh1