Chinese operations near the Senkaku Islands are becoming more frequent as overall Chinese and Russian forces have been more active in the Western Pacific, Japanese officials said on Tuesday. Defense Minister Nobuo Kishi said Japanese forces will deal with any attempts by China to change the status quo of the Senkaku islands resolutely and calmly. […] 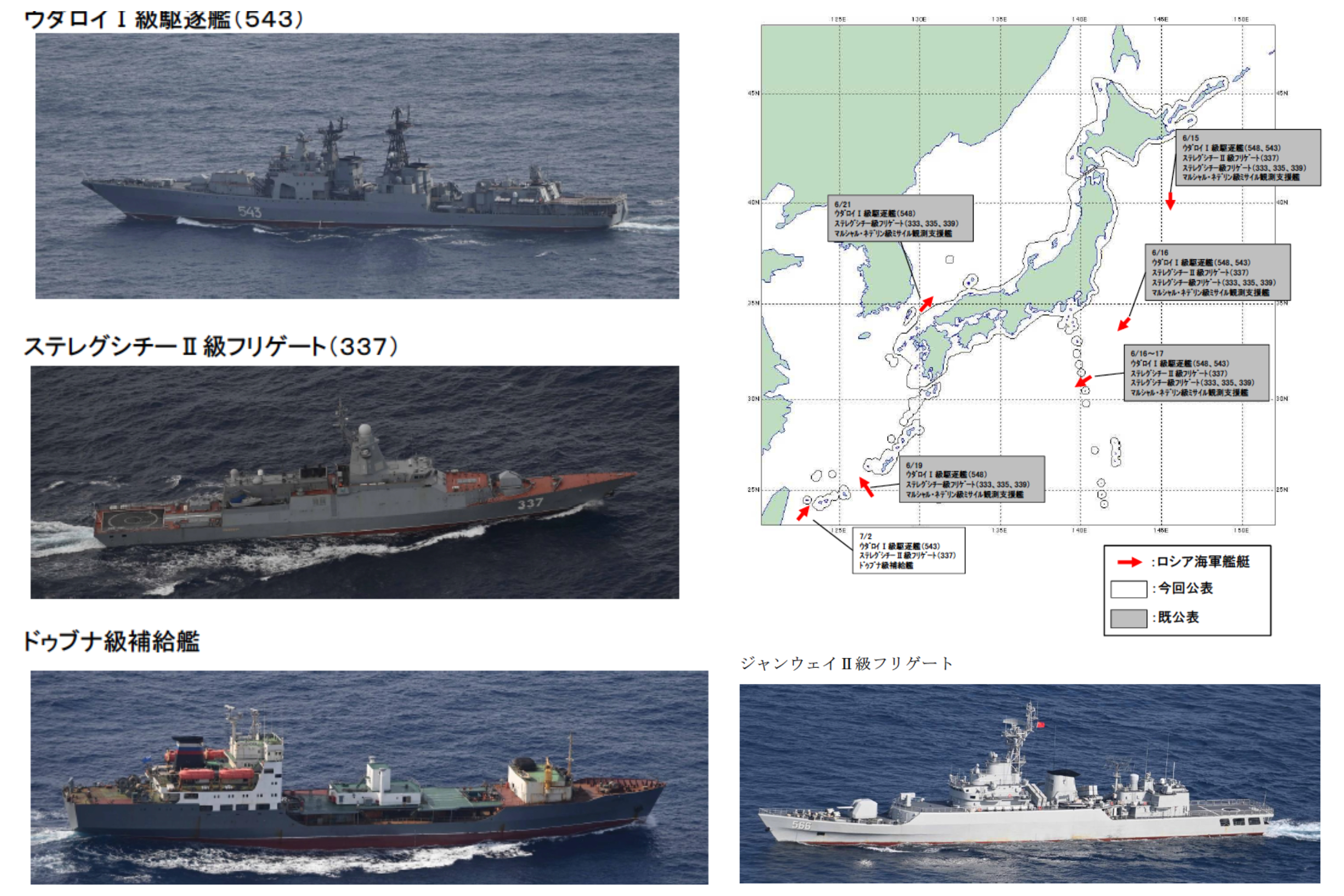 Russian and Chinese ships have operated near the Senkaku Islands. Japanese MoD Image

Chinese operations near the Senkaku Islands are becoming more frequent as overall Chinese and Russian forces have been more active in the Western Pacific, Japanese officials said on Tuesday.

Defense Minister Nobuo Kishi said Japanese forces will deal with any attempts by China to change the status quo of the Senkaku islands resolutely and calmly.

The Senkaku Islands, known as Diaoyu by China and Diaoyutai by Taiwan, are a chain of small, uninhabited islands located approximately 186 kilometer northeast of Taiwan and around 410 kilometers west of Okinawa Japan administers the islands though both China and Taiwan claim them.

Kishi said that at around 7:44 a.m. on Monday, a People’s Liberation Army Navy Jiangwei II frigate passed southwest of Uotsuri Island in the Senkaku Islands. This marked the fourth time Chinese ships have entered the contiguous zone of the Senkaku Islands with previous instances in 2016, 2018 and last month. International law allows ships of any nation, including warships, to sail through the contiguous waters of a coastal nation unless they threaten the nation’s safety. The U.S. claims the same right when its ships pass through the Chinese-controlled Paracel Islands.

Kishi added that a Russian Navy Steregushchiy-class corvette also sailed in the contiguous zone around ​​Uotsuri Island on Monday.

In a press conference on Tuesday, Chief Cabinet Secretary Hirokazu Matsuno said it was possible that the Russian ship was in the area to avoid Typhoon Aere. Matsuno also stated that two China Coast Guard ships approached the territorial waters of the Senkaku Islands early on Tuesday and had approached a Japanese fishing boat. Matsuno said Japan had issued diplomatic protests to China on these actions.

The Russian ships were not identified by name in the press conferences but releases by the Joint Staff Office (JSO) of the defense ministry on Saturday and Tuesday showed the Russian corvette RFS Gremyashchiy (337) operating near the Senkakus.

Three Russian Navy ships were sighted Friday sailing south of Yonaguni Island, part of the Yaeyama Islands group, according to a JSO statement released Saturday. The ships then sailed northeast between Yonaguni Island and Iriomote Island, the statement added. Hull numbers visible in pictures released by JSO identified the Russian ships as destroyer RFS Marshal Shaposhnikov (543), corvette RFS Gremyashchiy (337) and replenishment ship Pechanga. The three ships had previously made a port visit to Manila on June 21 to 23 and likely have been operating in the Philippine Sea since.The JSO release noted that Marshal Shaposhnikov and Gremyashchiy had been part of a seven-ship Russian surface group operating near Japan since June 15. The release also stated that the JMSDF replenishment ship JS Mashu (AOE-425) and a JMSDF P-3C Orion Maritime Patrol Aircraft of Fleet Air Wing 5 operating out of Naha Air Base, Okinawa monitored the Russian ships.

The Japanese defense ministry on Monday issued an image identifying the PLAN frigate as CNS Huaihua (566) , along with a statement that the destroyer escort JS Abukuma (DE-229) monitored the PLAN ship.

A subsequent JSO release on Tuesday stated that three Russian ships were sighted sailing north on Monday in the contiguous zone between Kuba Island and Taisho Island, both part of the Senkakus, and subsequently sailed northeast to the East China Sea after leaving the contiguous zone. The release stated that Abukuma, Mashu, destroyer JS Shiranui (DD-120) and a P-3C Orion of Fleet Air Wing 5 monitored the Russian ships.

The JSO also announced on Tuesday that a PLAN Dongdiao-class intelligence ship with the hull number 794 had been sighted that day at 4 a.m. sailing northwest in an area 120 kilometers northeast of Miyako Island and subsequently sailed northwest through the Miyako Strait into the East China Sea. The release noted that Dongdiao 794 had been sighted in the Tsushima Strait on June 12 and provided a map indicating that the ship had completed a near circuit of the main Japanese islands of Honshu and Kyushu. The release stated that the destroyer JS Setogiri (DD-156) and minesweeper JS Kuroshima (MSC-692), along with a JMSDF P-1 MPA of Fleet Air Wing 1 stationed at JMSDF Kanoya Air Base and a JMSDF P-3C Orion of Fleet Air Wing 5, monitored the PLAN ship.

In other developments, the PLAN 40th Chinese Naval Escort Taskforce consisting of destroyer CNS Hohhot (161), frigate CNS Yueyang (575) and replenishment ship CNS Luomahu (907) returned to its homeport of Zhanjiang, Guangdong on Tuesday morning stated a China Ministry of National Defense news post. The deployment lasted 172 days, with a cumulative voyage of nearly 90,000 nautical miles, according to the release. The PLAN has been dispatching regular anti-piracy escort missions to the Gulf of Aden since 2008. The current deployment, which started on June 8, includes the 41st Chinese Naval Escort Taskforce consisting of destroyer CNS Suzhou (132), frigate CNS Nantong (533) and replenishment ship CNS Chaohu (890).