The Navy is canceling early separation programs and encouraging delayed separation as it aims to retain more sailors, especially in sea billets. The Navy announced the cancellation of enlisted early out programs, as well as waivers for new time-in-grade requirement, in NAVADMIN 142/22, released on June 22. Under the policy, service commitments, which include enlistment […] 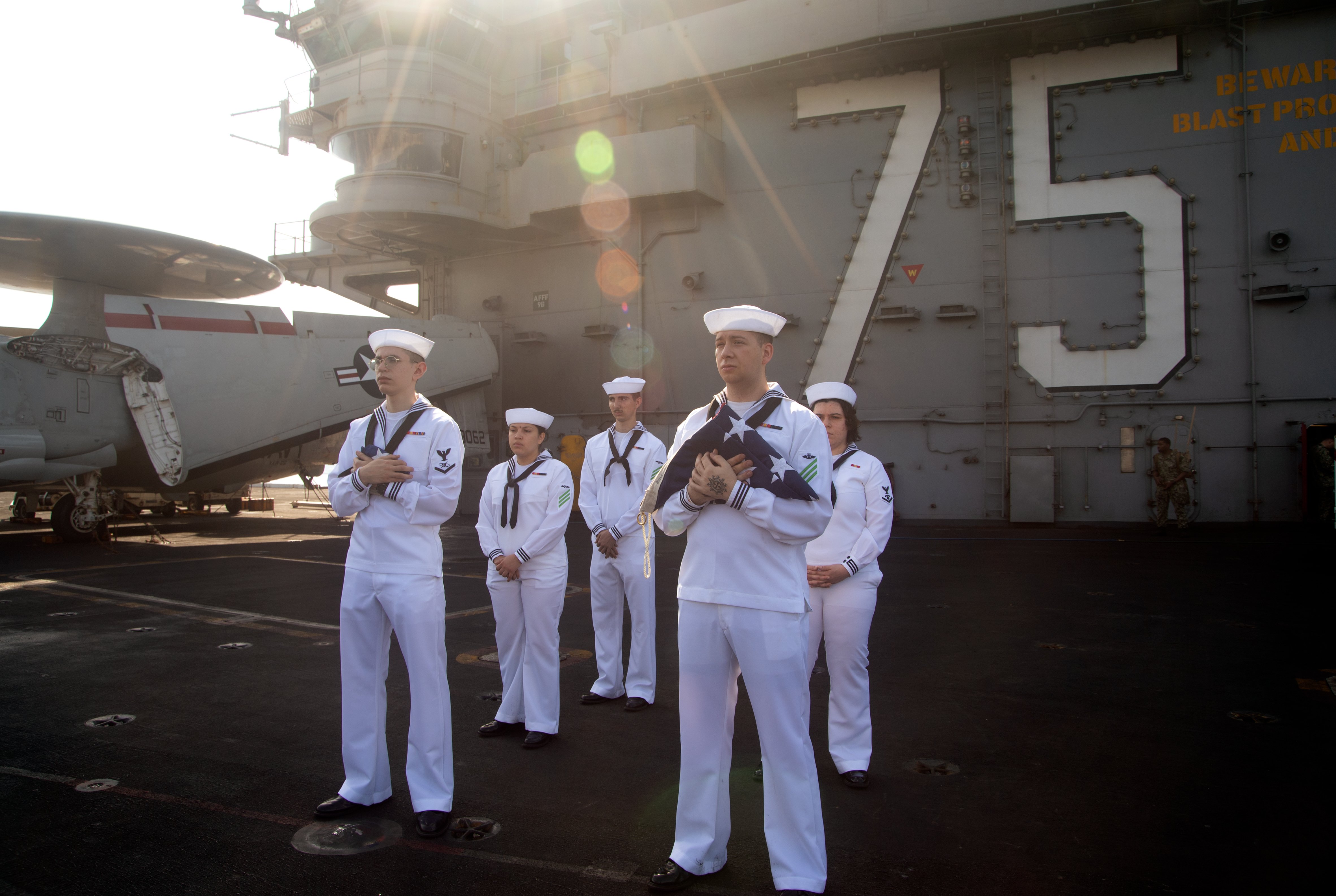 Sailors standby for color detail on the flight deck of USS Harry S. Truman (CVN-75) as the ship pulls into Marseille, France for a scheduled port visit, June 18, 2022. US Navy Photo

The Navy is canceling early separation programs and encouraging delayed separation as it aims to retain more sailors, especially in sea billets.

The Navy announced the cancellation of enlisted early out programs, as well as waivers for new time-in-grade requirement, in NAVADMIN 142/22, released on June 22.

Under the policy, service commitments, which include enlistment contracts and permanent changes of station, will be fulfilled. Anyone who has trouble completing their service requirements should work with their chain of command and/or detailers to figure out alternatives.

Those seeking commissions are still encouraged to do so, with those requests considered on a case-by-case basis.

The Navy is also looking for enlisted sailors who are willing to delay separation or retirement, with applications due Aug. 31.

Any sailor with who was approved to separate or retire on or before March 31, 2023 can ask to have it delayed until Sept. 30, 2023, if their billet would be “gapped” by their departure, according to the NAVADMIN.

If a sailor with a sea billet applies and is approved, they will remain on sea duty, per the NAVDMIN.

Sailors who were separating or retiring due to high year tenure are also eligible to request a waiver to extend their service by up to a year if they are in “critical operational billets,” either on shore or at sea, that will have gaps upon their retirement or separation.

“The purpose of this NAVADMIN is to implement key force management personnel actions in the enlisted active component to ensure the Navy remains fully manned and operationally ready,” according to the NAVADMIN.

However, the reasoning behind the NAVADMIN changed between the copy on the Navy’s website and a draft accidentally posted. The original text, first reported by Military.com, had the reasoning for the NAVADMIN as concerns about the recruiting environment and sailor losses due to COVID-19 vaccine separations.

“As the Navy shifts into an environment of sustainment, retention of every capable Sailor will be critical to the operation readiness of the Navy,” according to the draft. “Due to the uncertainty regarding COVID-19 Pandemic vaccination losses and the recruiting environment, where competition for talent is especially tough, the Navy is opening the aperture for additional [force management] personal policy levers to retain Sailors.”

Neal Fisher, a spokesman for the chief of naval personnel office, said that a draft of the NAVADMIN was accidentally posted to the website.

“Our biggest concern is that we have the right people in the right job,” Fisher said.
The Navy is not overtly concerned about the effect of COVID-19 vaccine separations on retention, Fisher said.

There have been a total of 998 active-duty sailors and 209 reservists who have been separated due to refusal to get vaccinated against COVID-19, according to a June 22 update from the Navy. Another 20 sailors in their first 180 days were also separated.

That means the Navy separated about 0.29 percent of its end strength due to refusal to vaccinate against COVID-19. That percentage does not include reservists.

More sailors would likely be separated, but the Navy is currently prohibited by a class lawsuit ruling from separating sailors who have submitted a religious exemption to the vaccine.
During discussion of the National Defense Authorization Act, Republican congressional members of the House Armed Services raised concerns that the mandated vaccination is leading to recruiting issues.

Cmdr. Dave Benham, director of public affairs for Navy Recruiting Command, told USNI News that he does not have numeric or anecdotal data about the effect of the vaccine requirements on recruiting.

“We recognize that we are in a very challenging recruiting environment, in competition with our fellow services and the private sector for the top talent we need to serve as the next generation of Navy leaders and warfighters,” Benham said in a statement. “That’s why we are presently offering the highest enlistment bonuses in our history, with a minimum EB of $25000, and up to $50000 for certain high demand technical rates, through July 7. While service is not just about the money, we feel these bonuses, taken with existing Navy benefits and the inherent satisfaction of adventure, global travel and service to our country in the world’s finest Navy will give us an advantage in recruiting top talent to lead us forward.”

The Navy was able to meet its recruiting goals for active-duty enlisted personnel in Fiscal Year 2021, but struggled to recruit active-duty officers, USNI News previously reported.

Recruiting challenges are a sign of the times, Fisher said, noting that it is affecting all of the services, not just the Navy.

Retention is always a focus because the Navy wants to keep trained sailors, he said. There is a need for people in sea billets.