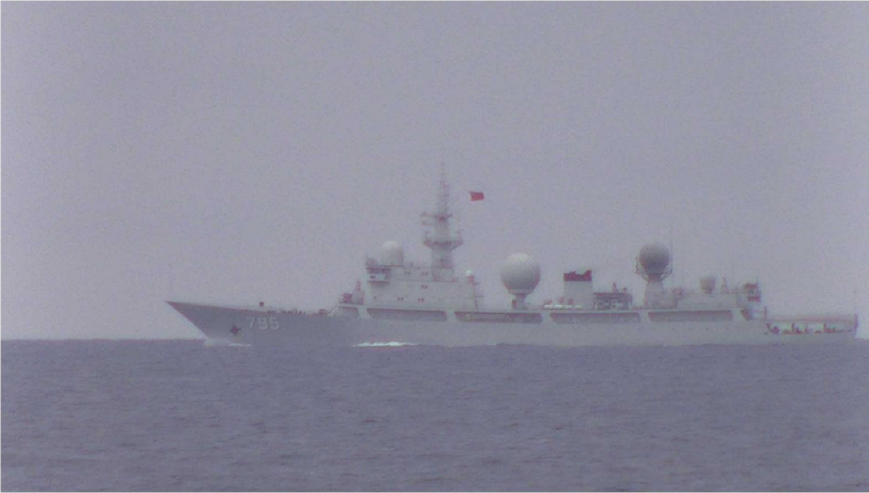 On Wednesday the Joint Staff Office (JSO) issued a released stating that at 9 a.m. on the same day, the Japan Maritime Self Defense Force sighted a People’s Liberation Army Navy Luyang III destroyer and a Jiangkai II frigate sailing southeast in an area around 75 miles northwest of Amami Oshima Island. The two ships were joined by a Yuzhao class Landing Platform Dock and a Fuchi class replenishment ship and the four ships sailed east between Amami Oshima Island and Yokoate Island into the Pacific Ocean. Hull numbers provided in the release correspond to destroyer CNS Xiamen (154), frigate CNS Binzhou (515), LPD CNS Siming Shan (986) while the hull number for the Fuichi class (904) does not correspond to any of the ships in the class but the PLAN has been renumbering several of its auxiliary and support ships.

On Friday, the JSO issued a release that on Thursday at 9 p.m., a PLAN Dongdiao-class surveillance ship, hull number 795 was sighted traveling southward in an area 130 km northwest of Kume Island. The ship then sailed southeast between Okinawa and Miyako Island into the Pacific Ocean. The release added that the JMSDF destroyer JS Setogiri (DD-156) and minesweeper JS Kuroshima (MSC-692) along with a JMSDF P-3C Orion maritime patrol aircraft of Fleet Air Wing 5 based at Naha Air Base, Okinawa monitored the PLAN surveillance ship.

Russia’s Defence Ministry in a release on Friday announced that the Russian Pacific Fleet has begun exercises in the Pacific Ocean. The exercises involve over 40 warships and support vessels, as well as 20 planes and helicopters and will end on June 10 10, in accordance with the Pacific Fleet’s 2022 training schedule stated the release. The Defence Ministry also added in the release that the exercise would involve task groups together with naval aviation units detecting notional enemy submarines, training in air defense of ship groups along with conducting combat and training exercise involving surface and aerial targets. The exercises will also involve training in technical and logistical support of at sea units.