The following is the United Kingdom’s National Strategy for Maritime Security that was released this week. From the report As an island nation with significant global interests, the importance of the maritime sector to the United Kingdom is unquestionable. It has been, and will continue to be, the lifeblood of our nation’s economy. Published just […]

The following is the United Kingdom’s National Strategy for Maritime Security that was released this week.

As an island nation with significant global interests, the importance of the maritime sector to the United Kingdom is unquestionable. It has been, and will continue to be, the lifeblood of our nation’s economy.

Published just over a year ago, the Integrated Review reaffirmed that the first duty of any government is to protect our people, our homeland, and our democracy. From a maritime perspective this is about protecting our ports, shipping routes and subsea infrastructure to ensure the free flow of goods and information that support our economy. It is about securing the waters of the UK and our Overseas Territories and Crown Dependencies, particularly the UK Marine Area (UKMA) at home, which encompasses both our Territorial Sea and the Exclusive Economic Zone (EEZ) that surrounds it. We will protect the maritime domain and use our world-leading capabilities to monitor the seas and ocean, acting whenever and wherever we need to.

This strategy is being published at a time of increased global tension, Russia’s illegal war on Ukraine has demonstrated the UK’s pivotal role in supporting an international order based on rules and principles. The barbarism and war crimes being committed in Ukraine are the kind of acts that had been consigned to the history books. The UK will develop our security and economic partnerships to deter and tackle aggression, coercion, and, oppression wherever it may appear. 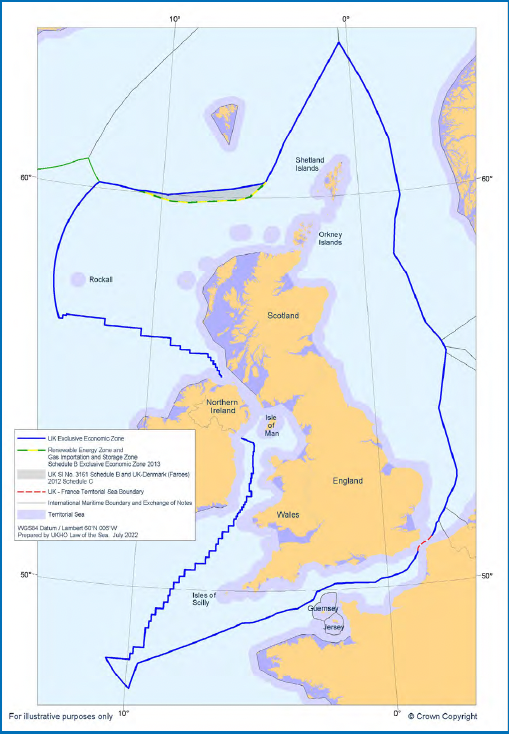 The UK will merge hard security and economic security, while building stronger global alliances to bring to bear the full range of our capabilities in championing the values that underpin our society. This puts Global Britain into action, working with international partners and institutions to uphold the UN Convention on the Law of the Sea including freedom of navigation, maintaining the international order and building a global network of liberty.

Leaving the European Union has given us the ability to develop policies and strategies that represent the priorities and values that matter most to the British people. The National Strategy for Maritime Security captures this. It clearly defines maritime security and what this means for the UK, recognising the far-reaching impacts from sources of insecurity on the British people and our global interests.

It sets strategic objectives and commitments that government will implement over the next five years and sets out how the implementation of the strategy will be monitored.

This strategy looks at how the UK can continue to strengthen the defences of the maritime sector, setting out robust, whole system approaches to emerging threats. Using our strength in security and diplomacy, our economic heft and our will and agility to lead the way in tackling some of the most challenging problems facing the international order. It will look forward to identify and mitigate future threats; from, in, and under the water. It draws on a rigorous evidence base from the UK Maritime Risk Assessment and incorporates input from industry, academia, and our global partners.

Maritime Security is a whole of government endeavour, but as the five Secretaries of State responsible for the majority of this activity we are delighted to present this strategy which sets out the huge range of work planned to ensure the protection of our nation’s maritime interests.