Marines are rethinking how the service does reconnaissance beyond its traditional light armored vehicles as part of the ongoing Force Design 2030 effort, officials said last week. With more unmanned systems on the market and the Pentagon continuing a shift toward potential operations in the Indo-Pacific, the Marine Corps in the next year plans to […] 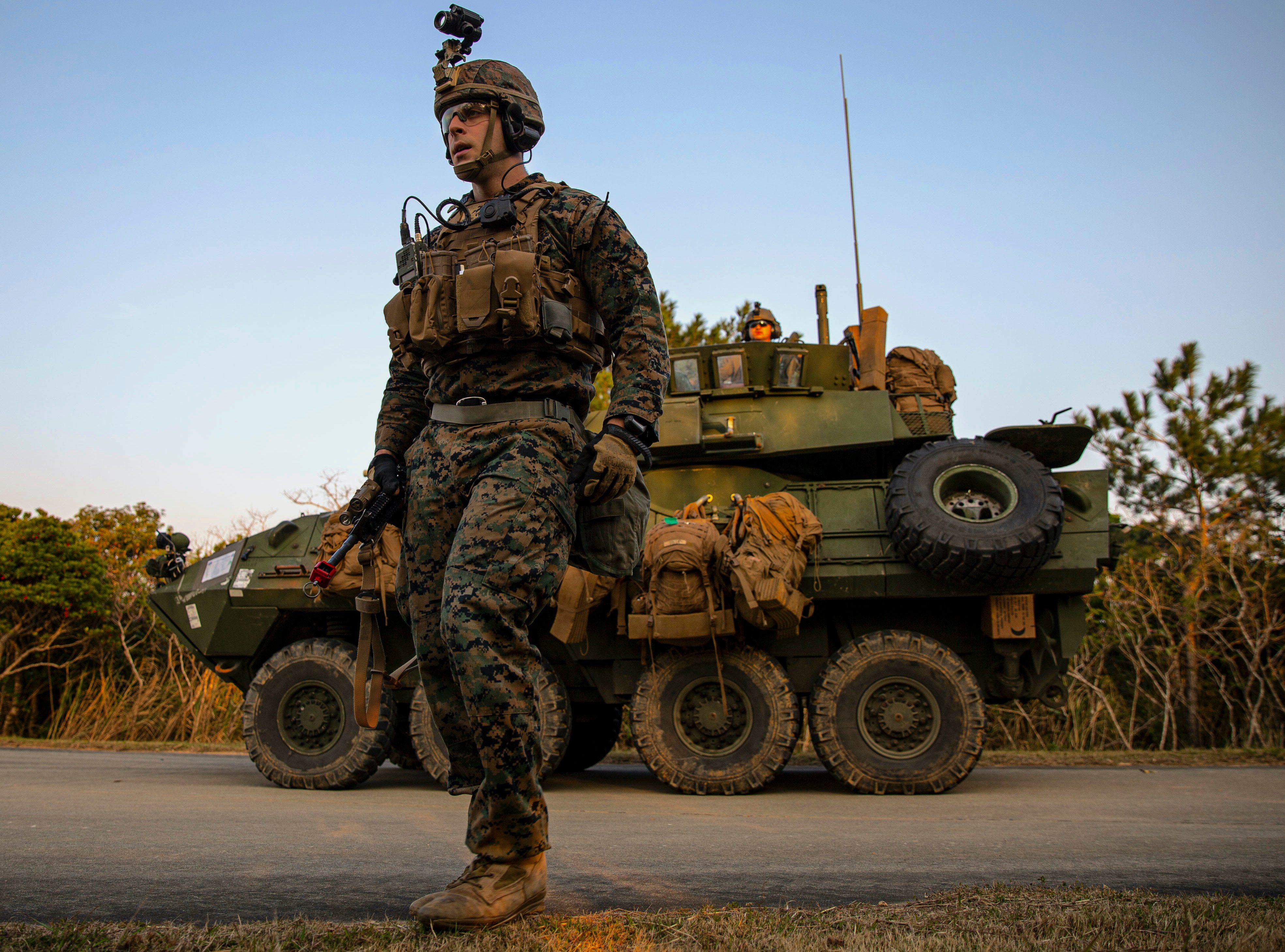 Marines are rethinking how the service does reconnaissance beyond its traditional light armored vehicles as part of the ongoing Force Design 2030 effort, officials said last week.

With more unmanned systems on the market and the Pentagon continuing a shift toward potential operations in the Indo-Pacific, the Marine Corps in the next year plans to experiment with ways to perform reconnaissance and counter-reconnaissance in a sea environment, according to the service’s most recent Force Design 2030 update.

But the service says it cannot depend on ground vehicles alone to perform the reconnaissance mission.

“Our light armored reconnaissance (LAR) battalions must transition from their current ground vehicle-centric approach to an all-domain mobile reconnaissance approach. Sole reliance on armored ground vehicles for reconnaissance is too limiting, especially in complex littoral environments,” reads the Marine Corps’ latest Force Design update, released earlier this month. “Attributes such as reconnaissance, surveillance, targeting beyond the line of sight, littoral mobility, and equipment that integrates with special operations and joint forces are needed.” 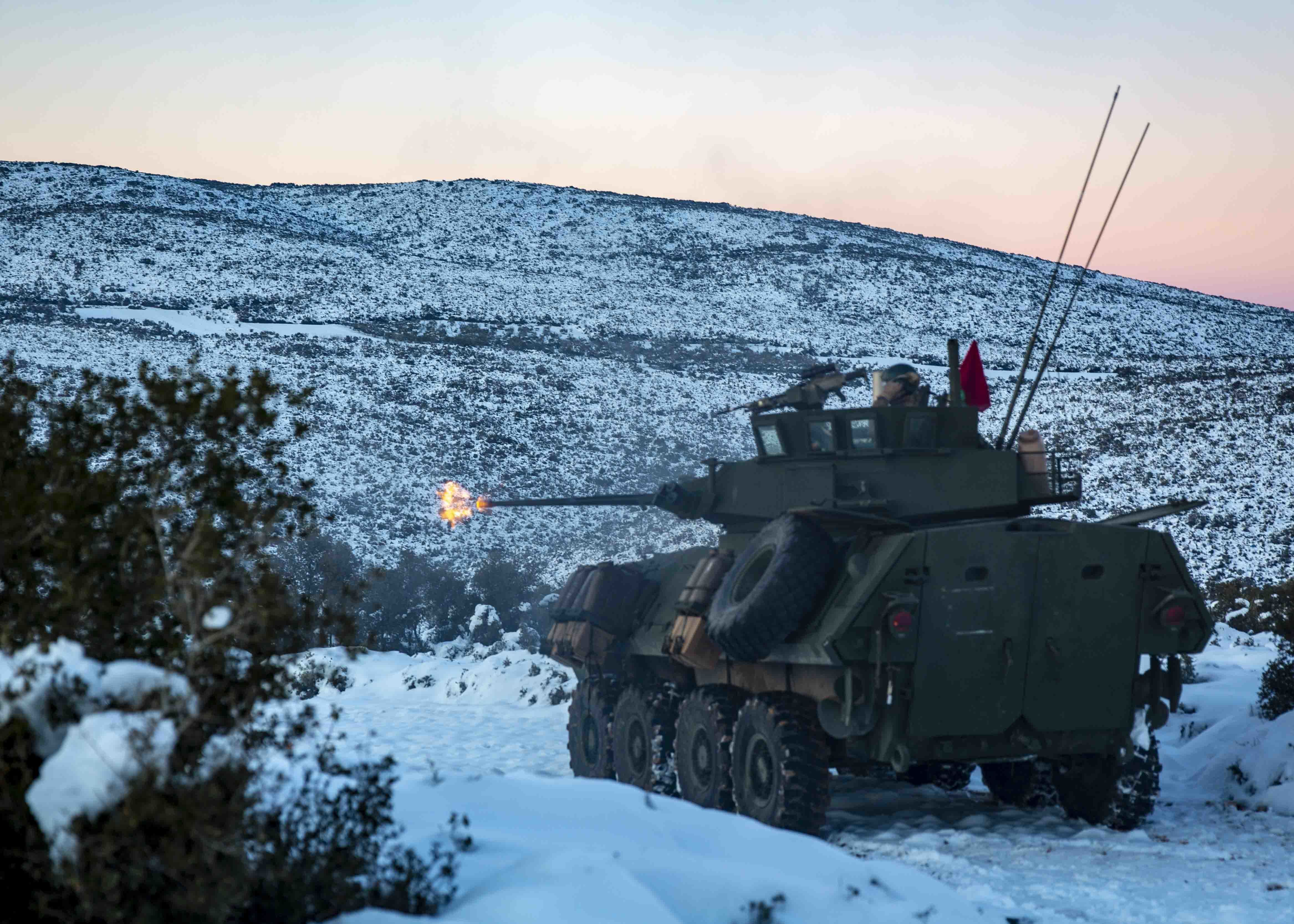 During a roundtable with reporters last week, Lt. Gen. Karsten Heckl, the deputy commandant for combat development and integration, acknowledged that Marines will perform reconnaissance differently, depending on the region and operating environment.

Heckl’s comments reflect how Marine Corps officials have recently described the service’s ongoing Force Design 2030 effort, which is aimed at preparing the Marines for conflict in the coming decade. The Marine Corps has said III MEF, based in Okinawa, Japan, will look different than I and II MEFs because III MEF is operating as the so-called “stand-in-force” in the range of Chinese weapons.

Marine Corps Systems Command, which is the service’s acquisition arm, has been working on the prototyping effort to replace the Light Armored Reconnaissance vehicle. That initiative includes evaluating a variant of BAE Systems’ Amphibious Combat Vehicle for the reconnaissance mission.

“My opinion is none of that works in the Indo-Pacific,” Heckl said of the vehicles. “I think LAR would look something more like a lot of unmanned in multiple domains.”

After several years of struggling to replace the aging LAVs, the Marine Corps embarked on a prototyping effort in 2020 that continued throughout last year.

“We are doing some demos and prototyping right now so we can get ahead and maintain decision space for the commandant as we flesh out what that recon capability’s going to be in the future,” Col. David Walsh, the acting program executive officer for land systems, told reporters. “We’ve now got a head start on if there’s a vehicle that needs to be fielded and bought to support that vision, we’ve now got a couple years head start. We’ve done some competitive prototyping and that vehicle won’t be 5 years out. It’ll be a couple years out from being fielded.” 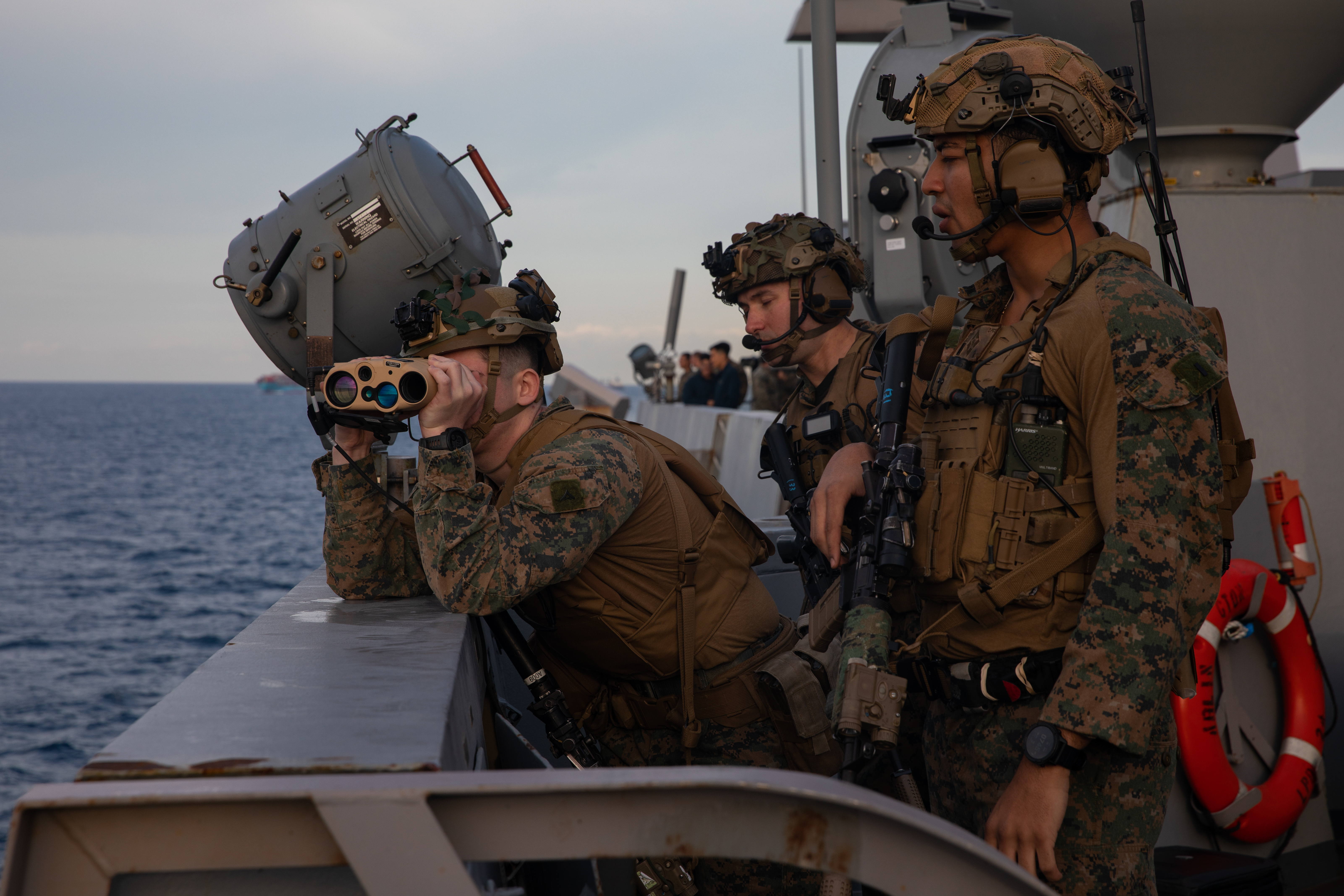 The Force Design 2030 initiative has included the Marine Corps shedding some of its heavier equipment, like tanks, and investing in capabilities like anti-ship missiles, which the Marines want to fire from expeditionary nodes that smaller units set up on islands and shorelines.

With a heavy focus on reconnaissance, the Marine Corps’ recent Force Design update said the reconnaissance and counter-reconnaissance experimentation will influence how the service pursues ground vehicles in the future.

“Choices made in the maritime mobility discussion above will also affect the [Ground Combat Tactical Vehicle Strategy], as will its integration with our uncrewed systems roadmap. We must continually refine this strategy to ensure it is operationally suitable and logistically supportable,” the document reads.

As the Marine Corps assesses how it will operate in the Indo-Pacific, the service needs to figure out how it will perform the reconnaissance mission across a vast region that mostly includes water.

“What do our organizations already recognize? They recognize that in terms of where the commandant has pointed us, then our focus is on how we operate in and affect battlespace that includes more than land,” said Maj. Gen. Ben Watson, the commanding general of the Marine Corps Warfighting Lab.
“So if we’re going to own battlespace that includes water space, but we can only operate in wheeled vehicles and by walking around, then we are probably incapable of controlling that battlespace and maximizing our influence within it. So we’ve got to diversify the means with which we get ground.”

In addition to the maritime domain, the Marines need a strategy that factors in cyber and other non-kinetic elements, Watson said. Heckl said the MEF Information Groups would likely play a key role in performing reconnaissance missions when it comes to cyber-warfare.

“The biggest eye-opener for me as a new MEF commander was this new thing called MEF information group and the stuff – the scope, scale, breadth of what they were doing was eyewatering,” Heckl said. “But they’re short, we’re dramatically short in all [Military Occupational Safety]’s. They are low-density, high-demand. But I think that kind of highlights for you how much the MEFs are going to have to play into whatever this thing ends up looking like.” 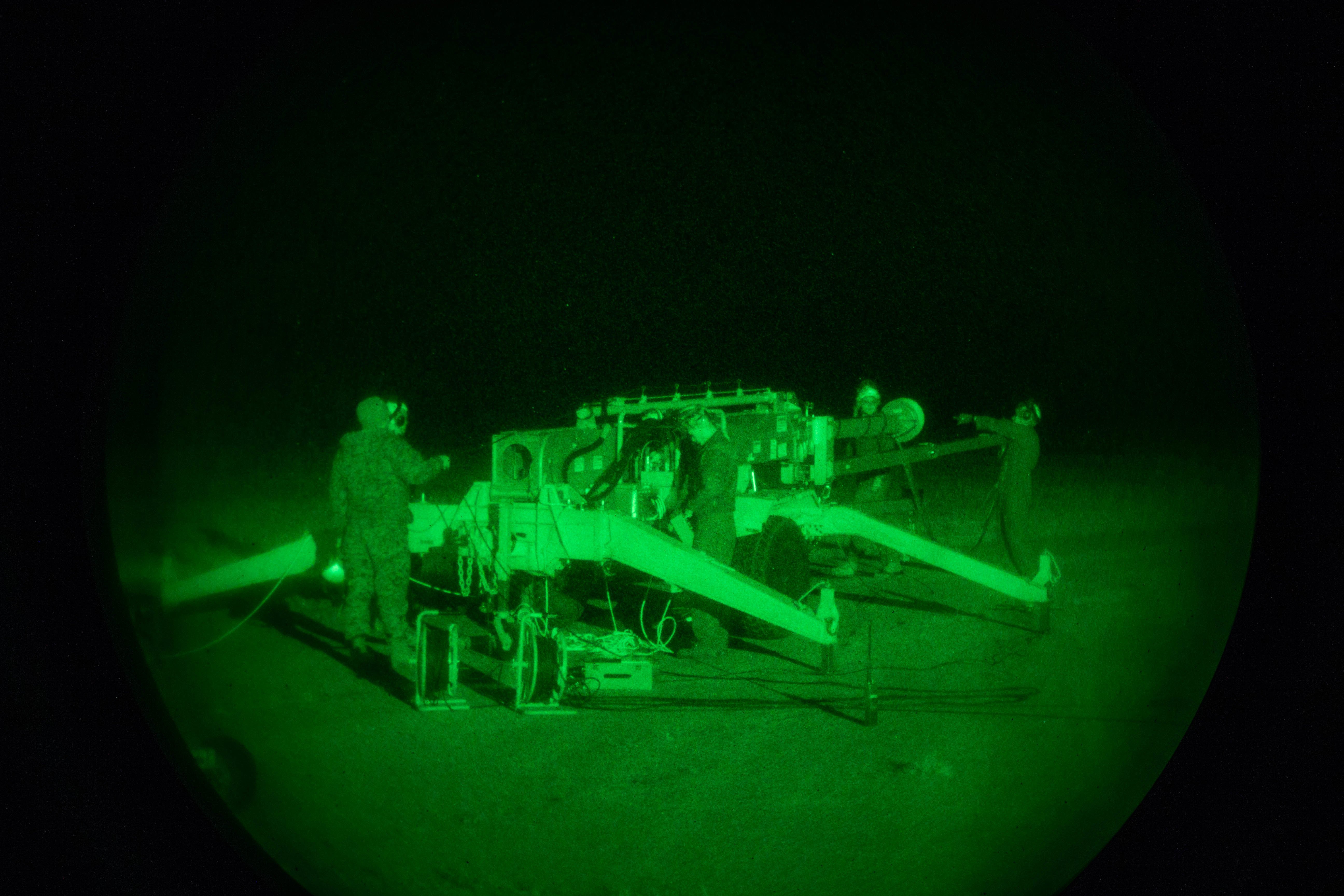 Getting after this will also likely include manned-unmanned teaming, which is how the Navy and Marine Corps now describe their unmanned systems strategy. It would pair manned and unmanned platforms together to conduct various missions.

“So how do we leverage manned and unmanned teaming and the characteristics of unmanned systems to enhance the survivability and effectiveness of our more limited manned systems. Because that also speaks to the logistics challenge, right, demand reduction. Nothing consumes more than humans,” Watson said.
“They are problems that are actively being wrestled with and that we are trying to help shape as well as support from headquarters to get after what the commandant’s looking for.”

In its recent Force Design update, the Marine Corps said it will release “an updated and refined” strategy for ground vehicles that take into account how the Marines will get after the reconnaissance and counter-reconnaissance mission.

The Marines have been told to use the work done by Task Force 61 Naval Amphibious Forces Europe/2nd Marine Division, recently created by U.S. 6th Fleet, as a springboard.

“Mobile reconnaissance battalions do not have to be mirror-imaged,” the update reads.