Defense Secretary Lloyd Austin has ordered the massive Red Hill Fuel Depot shuttered and abandoned, a reversal from the Pentagon’s attempt to appeal a Hawaii order to close the World War II-era compound, the Pentagon announced on Monday. In a memo to DoD leadership and U.S. combatant commanders, Austin said the decision to close the […] 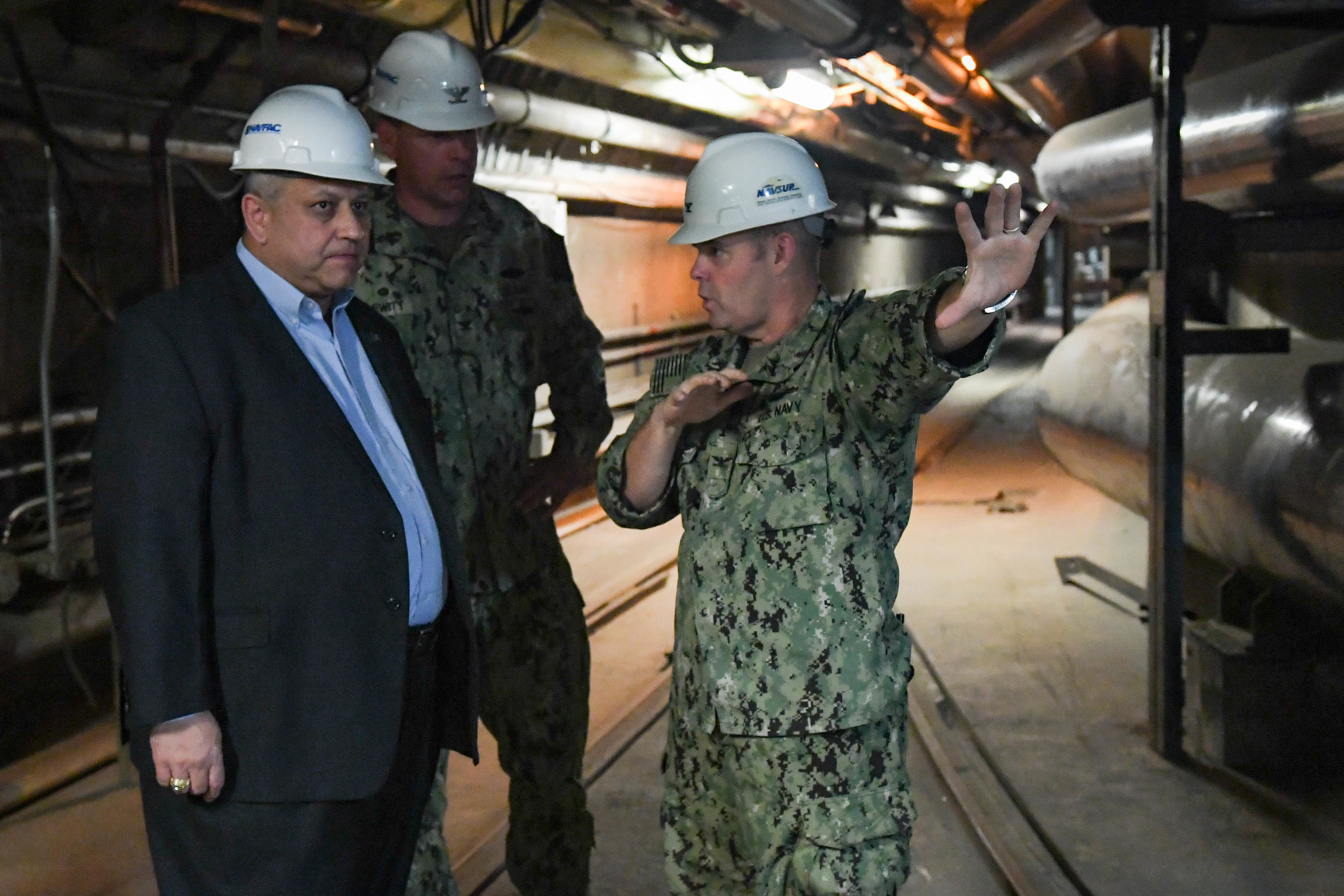 Secretary of the Navy Carlos Del Toro receives a brief on well operation and recovery initiatives from Capt. Burt Hornyak, commanding officer, Fleet Logistics Center Pearl Harbor during a tour of the Red Hill Well in Aiea, Hawaii. Secretary Del Toro is in Hawaii to meet with families and see the progress that has been made in restoring and protecting the island’s safe drinking water on Feb. 26, 2022. US Navy Photo

Defense Secretary Lloyd Austin has ordered the massive Red Hill Fuel Depot shuttered and abandoned, a reversal from the Pentagon’s attempt to appeal a Hawaii order to close the World War II-era compound, the Pentagon announced on Monday.

In a memo to DoD leadership and U.S. combatant commanders, Austin said the decision to close the facility comes after “a review of the facility’s long-term future, to include the option of defueling and permanently closing RHBFSF. Since late January 2022, we have been on an aggressive schedule to analyze and determine the distribution of fuel reserves for our operations in the Pacific theater. This work has been evidence-based and fully aligns with our focus on the population, the environment, and national security.”

Under the memo, the Department of the Navy will start the process of determining how to remove the remaining fuel from the facility that can hold 250 million gallons of fuel.

“By no later than May 31, 2022, the Secretary of the Navy and Director, [Defense Logistics Agency] will provide me with a plan of action with milestones to defuel the facility. The plan of action shall require that defueling operations commence as soon as practicable after the facility is deemed safe for defueling and target the completion of that defueling within 12 months,” reads a Monday memo from Austin.
“Redistributing our fuel reserve across the Indo-Pacific will better position the United States to meet future challenges in the region. Our approach will fully comply with best practices and environmental regulations for fuel storage on land and afloat.”

The order follows the ongoing outcry in Hawaii after operators at the fuel depot spilled 14,000 gallons of fuel in November that contaminated drinking water for both military and civilians near the facility.

“We are committed to protecting all of the residents of Hawaii, the environment, and the security of our nation, this plan will be developed and implemented in a responsible and safe manner that complies with environment laws and best practices. This work will be done concurrently as we continue to work on the remediation and restoration of safe drinking water and getting our families back in their homes,” Secretary of the Navy Carlos Del Toro said in a statement.

Up until the announcement on Monday, the Department of Defense was appealing a Hawaii Department of Environment order to permanently shut down the site. Red Hill temporarily stopped operations in December.

“We hope to collaborate with the State of Hawaii in a way that would allow the parties the time and space needed to reach solutions together,” Deputy Secretary of Defense Kathleen Hicks said in a February statement. “We proposed options for how this might work in an effort to find a mutually agreeable path forward, and we look forward to continuing our dialogue with the Governor, the Attorney General and the Hawaii Department of Health.”

In a Monday statement in support of the closure, Sen. Mazie Hirono (D-Hawaii) praised Hicks in her role in the decision.

“I would like to commend leadership at the Department of Defense—especially Deputy Secretary Hicks, with whom I have been in weekly contact over the last few months—for reaching the conclusion that shutting down this facility is the right thing to do for the people of Hawaii and for our environment,” the statement reads.

“Our national defense begins with the health and safety of our people, and there are better solutions for strategic fueling today than there were when the Red Hill storage facility was built,” Ige said in a statement, according to The Honolulu Star-Advertiser. “We look forward to working with the Navy to safely defuel and permanently close the storage facility.”

The order from Austin will now force the U.S. to develop a new way to distribute the fuel across the Pacific, Timothy Walton, a fellow at the Hudson Institute, told USNI News.

“Closing Red Hill is straightforward but shifting to a resilient fuel architecture will be difficult. Hardened underground fuel stores were necessary in 1943, and given potent People’s Liberation Army strike capabilities, they are still necessary today,” he said.

Military planners believe that any part of a major Chinese assault on U.S. forces will start with a long-range guided-missile barrage targeting U.S. bases and logistics infrastructure.

“DoD will need to increase the distribution of its protected fuel stocks. This will require DoD to build new hardened underground fuel stores in other locations such as Alaska, the Marianas, Compact States, and Australia,” Walton said.
“Though costly, hardened underground fuel stores provide greater protection against attacks than above ground or cut-and-cover fuel storage tanks and increase the likelihood DoD can have stores available between deliveries during a conflict.”

In addition, Walton said the U.S. would need to increase its tanker fleet to handle the new fuel, as well as increase its ability to transfer fuel.

“Moving forward, we should see an equally serious commitment to shift to a resilient fuel architecture. This should involve billions of dollars of new investments in the forthcoming [Fiscal Year] 2023 budget into areas such as new hardened underground fuel stores, changes in DLA Energy fuel sourcing, gaining assured access to U.S.-flag tankers through an expanded and reformed Tanker Security Fleet and more chartered tankers, and new over-the-shore fuel transfer, distribution, and reconstitution capabilities,” he said.